I know, king of statistics and all that jazz.  But this one matters.  A lot.

We need to attract more people to New Brunswick but the best data source on who is coming and staying, the Census, doesn’t paint a good picture.  It is important to point out that the Census was taken in 2016 and we have had a fairly strong increase in the inward flow of immigrants since.

The Census is the best source on attraction and retention because it shows the number of people who were living in New Brunswick at the time of the Census who lived in another province five years previous.  There is no estimation.  No trying to track immigrants through medicare cards.  It shows the number in 2016 that did not live in the province in 2011.  The truest measure of attracting people (it’s not the best measure of the net change in population via interprovincial migration as it doesn’t consider those moving out).

The figure below shows the number (population aged 5+) living in New Brunswick in 2016 who lived outside the province in 2011.  It also shows the same figure for 2011 and for 2006.  In a nutshell we are hardly attracting any more now than we were a decade ago.  We have more immigrants but that is offset by a decline in interprovincial migrants. 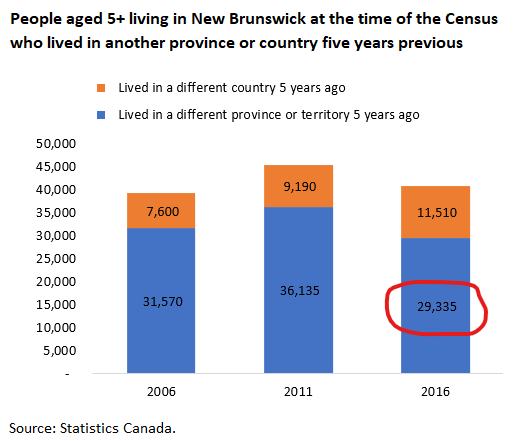 This is not tenable.  We will need to grow the population of younger people in this province and it will require a big boost in the number moving in.  If we are seeing a decline in the number moving in from other parts of Canada, almost down 7,000 from 2011 to 2016, we will need an even larger boost from those moving in from around the world.  There are lots of folks looking to come to Canada.  We need our share.

But we also need to focus more on how to keep them here.  BTW, this is not inconsistent with my view that we shouldn’t be obsessed with retention.  Some immigrants will leave – for many different reasons – they have less holding them here than those born here, with family and roots here.

But to better retain immigrants we need to:

Do a better job attracting those with the skills and interests to work the jobs on offer (or take on available entrepreneurial opportunities).

Do a better job of building and supporting ethnocultural communities.

Do a better job of ensuring we have the right mix of housing.  Developers are building as if the demographics aren’t changing right in front of them.

Do a better job of encouraging immigrants to engage with social organizations, churches and other entities to help them put down roots.

Do a better job of being an excellent place to live.

The last point is a catchall but and important one.  Those moving here – from elsewhere in Canada or from around the world – have moved at least once.  They can do it again.  City and town halls need to make livability even more of a focus – yes the plumbing of the city needs to work – garbage removal, snow removal, public safety, green spaces – but these are just table stakes.

We need to think about what would be compelling reasons for people to stay?  What would they brag about when talking about their city to friends and family back home?  That the garbage was picked up?

I went to the antique car event in downtown Moncton last night.  There had to be 25,000 or more people squeezed into the downtown.  There were two live concerts, one at each end of of the event.  Food trucks.  Kiosks.  The place was just throbbing with noise and energy.  And as I walked around I saw a lot of immigrants in the crowd.

We need to foster spaces for interaction – the new and the old, the old and the young.  From neighbourhood meet and greet picnics to massive festivals.  I would recommend communities large and small host many of these gatherings – one every couple of weeks or so.  They don’t have to be expensive – just find some innovative such as Saint John’s Moonlight Bazaar.  Such a simple idea but something people will remember and look forward to.  Bring people together.  They will laugh.  They will talk.  Collisions will happen.  Good things will happen.

The Brazilian community in Moncton wants to organize group events in the fall to teach people how to ice skate.  Giddy up.  I would recommend finding very specific ways to nudge newcomers to get out in the snow – skate, slide, ski, snowshoe, ice fish.  Bundle up!  Many will end up liking it.  And they will talk about it with friends and family back home.

As shown in the chart, we will continue to attract lots of folks from elsewhere in Canada.  We should focus on them too.  Many of the same rules apply.