I still remember a speech given by former PM Jean Chrétien in the mid 1990s talking about the promise of the information technology (IT) sector.  He said that unlike manufacturing or transportation or even other services that are based on population density, the IT industry could be done ‘anywhere’.  It would help level the playing field for economic development across Canada.  The smallest urban centres could now compete with the largest.  It was a brave new world (I am paraphrasing).

The point, made by many IT experts then and now, is that while IT work can be done anywhere, like so many industries, it tends to concentrate – or cluster – in certain areas that have a strong value proposition: talent pipeline, access to risk capital, access to large potential clients (not requiring a flight and long cab ride), etc.

So when I read this week that Atlantic Canada was ranked by Startup Genome as one of the top locations in North America for startups, I get excited.  Do we now have the value proposition to fulfill the promise of the IT industry?

The data suggests that for the most part the IT industry has not lived up to the promise for smaller regions, particularly in New Brunswick where, real ICT GDP growth from 1997 to 2018 was the slowest among the 10 provinces in Canada.

Look at the number of IT firms* by province, adjusted for population size.  NB has 34 IT firms per 100,000 population compared to 100 per 100,000 across Canada. If you look at firms by employment size, NB has fewer across each employment range, although interestingly the closest gap is in the 100+ range.  New Brunswick has 11 IT firms with at least 100 workers. But it is clear New Brunswick is not churning out nearly as many small IT firms and there are not enough scaling into the 10, 20, 50+ range of employment. 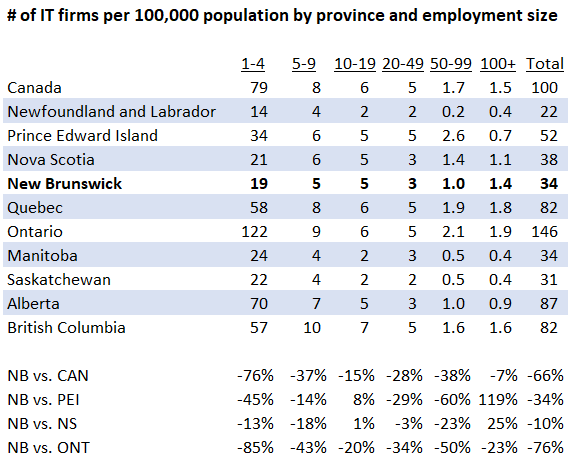 Now, I always get push back when I focus on GDP, firms or employment.  The real measure, I am told, is export revenue.  Is the region’s IT sector generating solid export revenue (as opposed to serving local markets).  Well, the export data shows a fairly good picture for NB, NS and PEI compared to Manitoba and Saskatchewan but overall the picture is not as strong.  Over the 2013-2015 timeframe (the most recent we have), NB IT firms generated an average of $317 in export revenue on a per capita basis which was less than half that in Quebec, Ontario and BC and lower than Alberta. 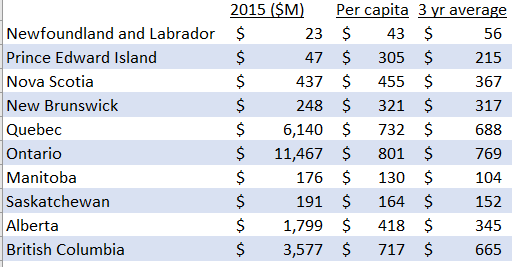 So, if we are indeed an excellent place for start-ups and scale-ups, let’s fulfill the promise.   Let’s sell this value proposition to the world.  Let’s bring in world class entrepreneurs to build their businesses here.  Let’s use this important sector as a driver of economic growth.

If the IT industry (startups) is really poised for growth, we should start to see an increase in small IT firms relative to other provinces and right now, we aren’t.

1 thought on “Will Atlantic Canada finally become a hotbed for IT?”