One of the interesting aspects of the iconic TV series Mad Men is its portrayal of age in the 1960s.  When looking to position the ad agency as youthful, Duck Phillips decres how old the core team is (average age late 20s) and bring in young hipsters (early 20s) because they understand what young people want.  Jane’s birth certificate is posted on the board and the other ladies make fun of her because it turns out she is 30 (and single, shockingly).  Roger Sterling is playing someone in his 40s but you wouldn’t know it.

Fast forward to 2019.  There is Fred.   Fred works at Costco in Moncton and though it would be impertinent to ask his age, he is easily in his mid 70s and just as chipper as a ’16er’ as my father used to day.

Not that long ago, Fred would have been looked down on.  Why must he work?  What is wrong with our public pension system that a mid-70s man is working, shockingly?  As shown in the chart below, as recently as 20 years ago only four percent of people aged 65 and older were in the New Brunswick labour market.

Nowadays, just about every time I use the term ‘challenge of an aging population’ or something similar, I get comments, emails and telephone calls from New Brunswickers of a certain vintage decrying my view that they are a ‘problem’, are intransigent and using political power to ensure that public spending is biased towards their needs.

My response, as I have repeatedly stated on these pages, in opinion columns and in public speeches, is that older New Brunswickers are an asset and should never be viewed as a liability. They worked their careers and paid taxes, volunteered in their communities, raised families and are now transitioning into new and important roles.

But this whole paradigm is predicated on having enough young people (or high income earners) in the workforce paying surplus taxes (relative to their consumption of public services).  Which is why we are having the whole debate these days about bringing in immigrants, developing new industries, fostering more entrepreneurship and why we need older New Brunswickers to be fully supportive of this.

Why are relatively few working after 65?  Look at the labour market participation rate among persons 65 and older in New Brunswick.  It was around 11 percent in 2018 (or 11 out of 100 people over the age of 65).  To put this in perspective, if we had the national la labour market participation rate there would be nearly 5,000 more working in an average month during 2018.

If we had Saskatchewan’s participation rate there would be nearly double working, or an additional 14,000 workers. If we could keep a 20 percent labour market participation rate through 2035 and the workers were distributed to industries needing them it would dramatically reduce the need to attract people to the province (there are many other benefits to attracting people beyond short term workforce needs, however).

Right now there are about 16,000 people over the age of 65 active in the labour market.  Trough 2038, if we had a 20 percent participation rate among this age group that would add an estimated 29,000 workers to the labour market by that year.

The public pension system is structured to discourage work after 65, in general and in very specific ways.  If people want to work part time or seasonal they can have payments and benefits clawed back.  In addition, New Brunswick is a relatively low cost place for seniors to live. 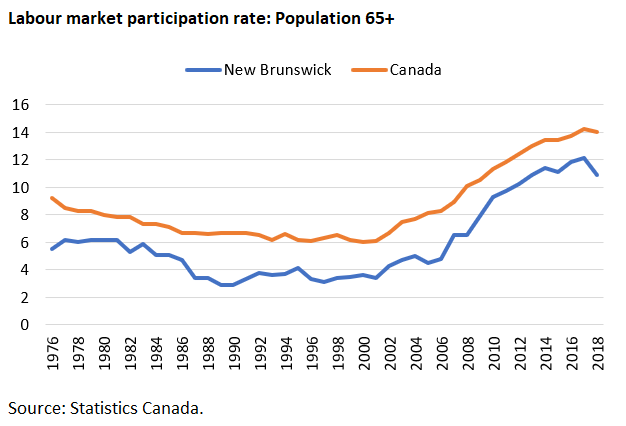 I don’t advocate policies that would force people to work – although reassessing the age at which public pensions (and public sector pensions) kick in should not be a taboo subject.  I have a  friend who retired as a teacher in his mid 50s.  He’s now in his early 80s.  He could (and likely will) live into his 90s meaning he will have been drawing an inflation indexed pension for far more years than he worked.  That has been changed.

I would like to see more policies (public and company-specific) that encourage older New Brunswickers to stay in the workforce but on their terms.   They could be a valuable source of workers for the seasonal tourism industry.  They could be tourism operators after they finish their first career.  They could be part owners/investors in small firms. If someone wants to work fewer hours per week, less days per month and less weeks per year, companies and organizations should adapt.

Boomers and volunteering
Beyond labour market participation, older New Brunswickers are an important source of charitable givers, volunteers, mentors and are able to give of their talents in a wide variety of ways.  There is some data that would suggest older NBers are less charitable these days (on average).  The share of the population aged 65 and older that indicated they had made a charitable donation on their tax form in 2017 had dropped by over six percentage points over a 20 year period.  For those aged 55 to 64 the drop was more significant declining from 30.5% in 1997 to 20.7% in 2017.  This might have something to do with the decline in church attendance (I don’t have the data to confirm this). Nevertheless, even if the amount of charitable donations goes down as a person shifts to retirement income, I would suggest continued charitable giving is a good thing.  We need more social and community engagement now than ever. 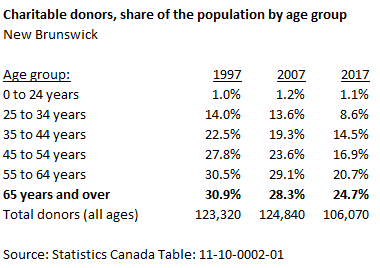 The last time Statistics Canada published data on volunteerism was a number of years ago so we don’t know in 2018 if 55+ volunteering is going down or up.  I would just say we need Boomer volunteerism across the province.  If people are retiring 25-30 years before passing on nowadays that leaves a lot of years for volunteering.

Mentoring
Boomers have built up a career of knowledge in their chosen field and I would like to think we could see even more mentoring of young people in those careers.

Boomers and political power
On this point, I would just say for those seeking public support for immigration, new industry development and other activities that might cause people inconvenience, proponents have to make a strong case.  Thirty or 40 years ago when the median age was in the early 20s people wanted work so they could stay in their community.  There was substantial support for mining, forestry, etc.  Now the dynamic is different.  It just is and the approach to gaining public support is different.

Boomers will play an important role in our future.  If they push for immigration, new industry development and entrepreneurship renewal in communities across the province it is far likelier that things will get done.  If they play a more direct role in these areas, there is a good chance that local economies around the province will strengthen in the years ahead.

2 thoughts on “Make no mistake, the Boomers are critical to our future”