One of the topics I have written the most about over the past 15 years has been the thorny issue of interprovincial migration, or the non-technical term “goin’ down the road”.  Take your pick: the exodus of young Atlantic Canadians to central and western Canada, the move of young people from rural to urban centres, and now, the risk of losing new immigrants to migration elsewhere in Canada.

The truth is that most economists would suggest that labour mobility within a country is a good thing.   Like freer trade and investment flows, labour mobility – at least in theory – is a sign of a flexible labour market – moving surplus workers in one jurisdiction to areas where there are lots of jobs. 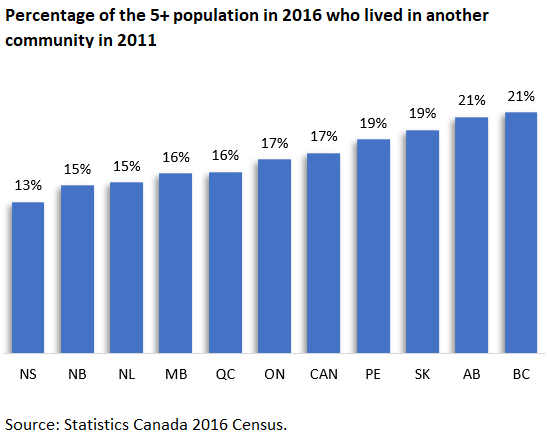 As I have written multiple times, the problem is that in the short run, this kind of flexibility in the labour market is a good thing but chronically it can be very hard on the exporting jurisdictions.  New Brunswick, as an example, will spend something like $250,000, in tax dollars to get someone from birth through university only to have them move to Ontario, BC or Alberta after graduation where they finally start paying taxes.  If you counted up all the net interprovincial migration over the past 40-50 years it would mean New Brunswick taxpayers subsidized to the tune of billions of dollars, workforce development for Ontario, et. al.

But the truth is that small jurisdictions will always face this problem for a variety of reasons and my new thinking is that we shouldn’t be so fussed about it.  In particular, the federal government should not tie our immigration numbers to a high level of immigrant retention.  It is a given that some share of new immigrants to this region are trying to get into Canada and using Atlantic Canada as the easy way in.  We should assume this.

Now that doesn’t mean we shouldn’t be very diligent in our immigrant recruitment – focusing on those with the skills, interest and aptitude for the jobs on offer here (i.e. don’t recruit economists for jobs in call centres) and other retention factors such as having family and friends here.  We should.  I have argued we should aspire to be the most welcoming place in the world for immigrants – as a differentiator.

But some will leave.  Just like many people in the past.  For whatever reason – careers, desire to see somewhere else, the view that grass is green elsewhere, or for the plain old reason they can’t wait to get out of Dodge.  We can’t stop people from leaving and we shouldn’t try that hard.  Quite frankly many of those that leave end up coming back and in many cases they are better for the experience.

We are going to need a pile of new people to move here over the coming years.  I have called for a population in New Brunswick of one million by 2040 and I have been approached by others to say we will need the million, yes, but by earlier than 2040.

So let’s get out there and bring them in.  Some will leave, most will stay.

For the federal government, don’t hold that retention sword of Damocles over our heads.  You know that labour mobility is good for the country and that will continue to hold in a world where far more immigrants are pouring into places that haven’t in recent decades attracted many.