I’ve recently started a diet to try and shrink down to a more appropriate weight.  Like a lot of people when I got real busy at work, I started to snack more and exercise less.  Now my shirts won’t button at the neck so it is time to crack the whip.

With a diet it is important to avoid stepping on the scale every day (as I have learned before), it’s not the daily ups and downs that matter but over weeks and months a determined effort to lose weight can pay off.  I have lost 20 and 25 lbs in the past.

The same holds true with the Statistics Canada Labour Force Survey (LFS) which was released yesterday.  It caused some discomfort with a few New Brunswickers (at least the few that reached out to me in a bit of a panic) as national employment grew by over 100,000 jobs.  We were the only province to register a month-over-month decline in seasonally adjusted employment.

It’s important to realize that month-to-month data is not a good indicator of trends.  Even with the seasonally adjusted data a long term look at monthly swings shows very little relationship with longer term trends.  Now, over six months or eight months this could indicate a trend but normally I recommend people continue to look at the year-over-year data.  Take April of this year and compare it to April of last year, and the year before, etc.

As shown in the table below the size of the labour force in New Brunswick rose slightly over this time last year and in fact has been rising very modestly since a period of decline that lasted a number of years.  I am preoccupied with this number over all others.  In April 2019 there were 388,800 active in the provincial labour market (working or looking for work). In April of 2006, there were 389,100 active in the labour market.   That is 14 years ago (and 25 lbs ago for me).  The recent trend is encouraging but there is much more work to be done.

As for the two CMAs (sorry CAs no seasonally adjusted data for you), Saint John seems to be rebounding nicely from a multiyear workforce growth and employment growth slump.  There were 70,900 in the SJ CMA workforce in April 2011.  Now there are just 71,500 – but this is up strongly after a very weak year-over-year performance the previous 12 months. 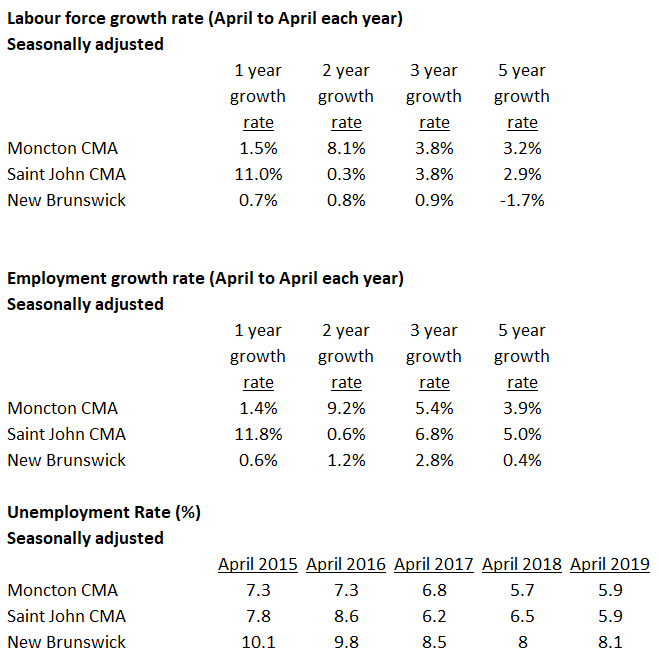 Finally, I’m not sure how low unemployment could go in New Brunswick.  The unemployment rate is down to 8.1 percent so theoretically it could drop further but with our high levels of EI usage – which Stats Can attempts to correct for in the seasonally adjusted data but not well enough in my opinion – I think will keep the rate relatively high even as businesses across New Brunswick are reporting serious difficulties recruiting staff.  In the past couple of years the number of people unemployed is touching record lows.

1 thought on “Don’t panic, with the LFS yearly matters more than monthly changes”