It’s one of the more interesting statistics for New Brunswick.

We are the only province in Canada with a larger share of its population living in rural areas now than way back in the 1960s.

Or the opposite, we have a lower share living in urban (population centres) then back in the 1960s.  As an example, as shown in the chart, in 1976 over 52 percent of us were urban dwellers (see definition below) and now that is down to 49 percent.  We are not the most rural, that would be PEI (NL is not shown in this chart, remember they were not part of Canada in 1926).

Partly this is what I would call a Jean-Guy Finn problem.  When you look at the population  15+* living in the ‘urban regions’ called “census metropolitan areas (CMA)” or “census agglomerations (CA)” in New Brunswick, one third (33%) live in ‘rural areas’ within the metropolitan or CA area (think Hanwell or the Moncton Parish).  Across the country, only 8% of the CMA/CA population 15+ lives in rural areas. 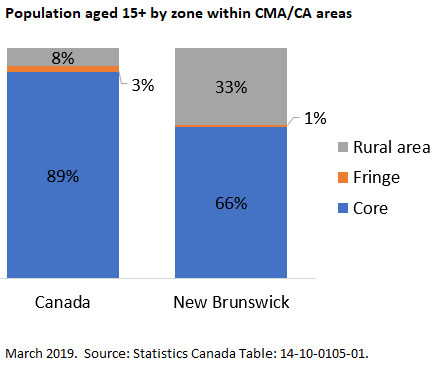 We have designed our municipal government boundaries, taxation, etc. to encourage people to live in rural areas in close proximity to urban cores.   For example, the City of Moncton has a municipal property tax rate of $1.6497 and the Moncton Parish has a tax rate of 0.4768.   To put this in context, a residential property assessed at $200,000 in the city will pay $3,299 and in the Parish will pay $954.  You save nearly $2,400 per year by living outside the city walls.  Depending on your income level, that would work out to $3,000-$4,000 or so off your top line (pre-tax) income each year.

I believe we need to do more to encourage urban population and the building up of urban core areas in New Brunswick.  There is ample evidence to support this as a public policy objective.

There are just not enough people living in urban core areas to make the provincial politics work.

So we put Finn back in the closet and kick the urban can down the road.

*Population 15 and older is used here because the data comes from the Labour Force Survey.

Definitions (all you ever wanted to know but was afraid to ask):