One of the least talked about economic trends in New Brunswick but the one with probably the most impact on the economy has been the shift in manufacturing over the past decade or more.  As shown in the first table, the province’s economy (real GDP, expressed in 2012 chained dollars) expanded by a fairly strong 26.1% between 1997 and 2004.  One of the main drivers of this growth was the performance of the manufacturing sector which saw its GDP contribution rise by over 38% in this time frame.

Most of that manufacturing GDP growth came from New Brunswick based firms, there wasn’t much investment from foreign firms with some notable exceptions such as AV Birla.

So, what happened?   Food manufacturing is actually a bright spot growing robustly in the 2004 to 2017 driven by growth in almost all subsectors (French Fries, dairy, seafood).  Beverage manufacturing, led by beer, saw a decline in its GDP contribution after growing strongly from 1997 to 204. 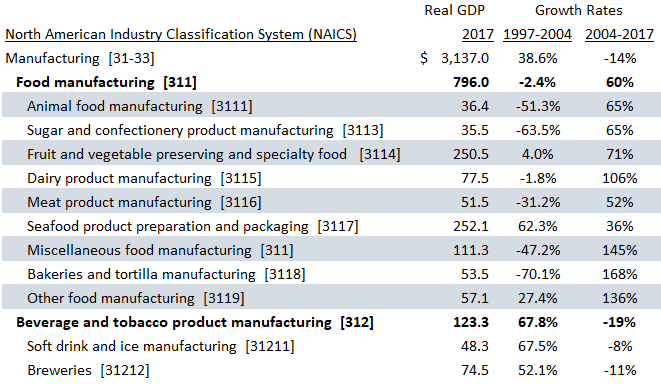 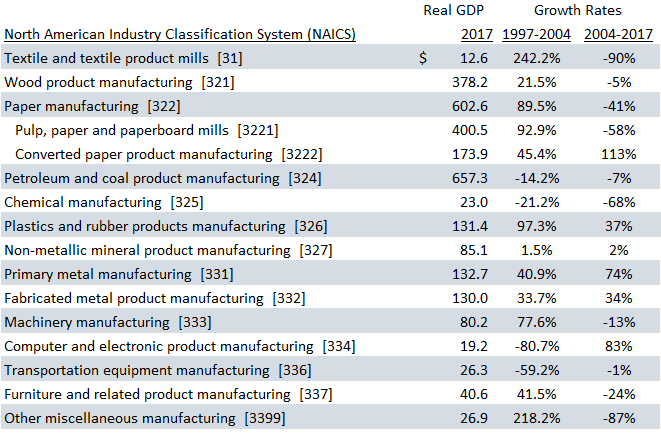 Now, you might be tempted to think this is a wider problem in Canada but you would be wrong.  Manufacturing GDP since 2004 is up in five Canadian provinces.  Excluding the turbulence in the auto sector, Ontario has done quite well.

Prince Edward Island has been a bright spot with 28% manufacturing GDP growth since 2004 – second best among the provinces.  As shown below, strong growth in many of its targeted sectors including aerospace, pharmaceuticals and chemicals.

So, what’s next for manufacturing in New Brunswick?   There are a number of issues impacting the sector including a tightening labour market, productivity problems in some sub-sectors, rising operating costs, heightening competition and a lack of scale in many of the sub-sectors.

Ignoring the problem won’t make it go away.  We probably should have a conversation about manufacturing – with manufacturers – maybe we can learn a thing or two from PEI.