As I have said on these pages many times, Dr. Herb Emery was a huge pickup when he agreed to come to UNB and take on the Vaughan Chair in Regional Economics.  He has churned out impressive research and insight since including in his weekly TJ column.   You will learn something every week – you may not always agree with him – but you will learn.

I was surprised that he didn’t mention Employment Insurance in his latest column on the labour shortage.  To me this is one of the most obvious drivers of our challenge in New Brunswick.

In 2016, there were 104,000 people who collected EI income at some point during the year or 27% of all wage and salary earners (this does include those taking paternity and maternity but that number is likely only 5-7% of the total).  There were actually more on EI in 2016 than back in 2008 and the share of wage earners has remained fairly consistent going back 20 years (between 27%-30%).  Of course not all of these people go on EI every year.  The structural users of EI – those that go on EI every year is closer to 40,000.

If you look on a regional basis, nearly 40% of every wage and salary earner in non CMA-CA areas (the population outside the urban centres) collected EI or nearly 56,000 people in 2016.  Studies from a few years ago found individual communities in New Brunswick with 70% to 80% EI usage. 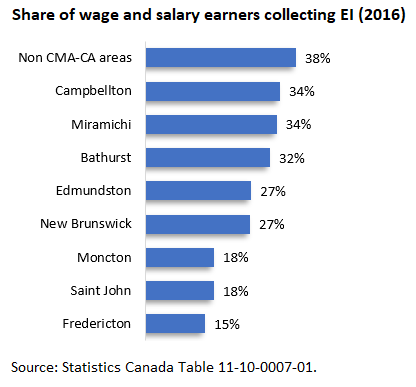 How does this contribute to the labour shortage?   As the poet Elizabeth Barrett Browning says “let me count the ways”.

1. Moderate wage raises, advocated by economists, would not entice those earning EI every year as part of their annual income.   They have already made the choice to engage in seasonal work and take a large portion of the year off.  A couple of bucks an hour isn’t going to entice them back into year round work.

2. The areas that use EI the most benefit from a high unemployment rate – it’s actually a benefit. So there is a perverse incentive to accept and even embrace high unemployment – to the point that EI users elsewhere in New Brunswick grumble about the fact they have to work more each year – it’s not fair we are told – even as the Walmart down the street is struggling to find workers.

3. The ‘high’ unemployment rate has led to a tepid response from government when pushed to allow  more immigrants.  This seems to have changed somewhat but it is still very common to hear politicians and bureaucrats question the need for immigrants in New Brunswick because of our ‘high’ unemployment.  They will, like many economists, blame low wages and tell employers to raise them.  The problem?  See Point #1 above.  In fairness to the politicians and bureaucrats, it is a little strange to visit a small community in New Brunswick with unemployment ‘rates’ of 20% or more and see the entire Subway restaurant filled with immigrant workers.

What’s the solution?  There has been more written on this subject than just about any other subject in New Brunswick.  You will have 25-30% EI usage in this province – and in some communities 40-50% usage – in perpetuity until the federal government changes the program.  That’s it.

And government is incredibly loathe to do it because there are dozens and dozens of ridings in Atlantic Canada, Quebec and a few elsewhere – that are heavily reliant on EI.  Not just the ‘voter’, the voter’s spouse, kids, parents and neighbours.

I have called for grandfathering older workers and for phasing in changes over a 5 or even 10 year period.  But if we don’t change the program, nothing will change.  It will continue to depress local economies and create labour market distortions.

And in this case, we work around around it.  Flood immigrants into these communities to work the jobs and hope they don’t adopt the EI lifestyle.  We may be too late on this as I have already heard anecdotally of immigrants starting to use EI as an annual income supplement.

3 thoughts on “On labour shortages in NB: Our EI problem has not gone away”