I get asked once in a while why I don’t talk about ‘economics’ in a blog called It’s the economy, stupid!”.   It is true that mostly I talk about economic development – but truth be told “It’s the economic development, stupid!”  doesn’t have a nice ring to it.  Plus I stole the title (to be more accurate David Jonah stole the title) from Bill Clinton’s advisor James Carville from a long time ago.

But just to ensure my bona fides, here is a purely economics concept.   There has been a lot of debate recently about the federal debt (and provincial for that matter) and it usually involves debt hawks decrying “no serious plan to eliminate the deficit for years!”.  The other school of thought (adopted by Trudeau and Morneau) is that as long as your GDP growth is faster than your debt growth, it doesn’t really matter.

So, consider the following simple chart.  It is based on an annual GDP growth rate of 2% and an annual growth in the federal debt by 1%.  Let’s not quibble about real versus nominal prices, this is a thought experiment.  You can clearly see in the chart that the federal debt grows every year.  The government hasn’t balanced the budget once in 80 years and yet the amount of government debt as a share of GDP is cut by more than half.  To be more specific, the government’s ability to service the debt is improving every single year even though debt is rising.   The Trudeau/Morneau team will point to long term GDP growth rates and say this is not unrealistic. 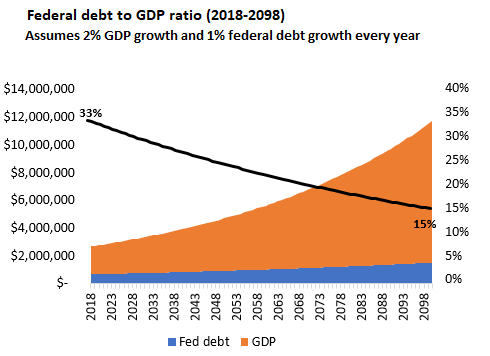 Now, of course, the debt hawks will say we can’t be sure that GDP growth will rise in the future as in the past.  And, this doesn’t take into account recessions or depressions where governments have to run huge deficits (or feel they have to).  If you are running deficits in the good years, you lose your wiggle room in the bad years.  And, they say, even if you can run structural deficits every year, wouldn’t it be better to cut taxes, etc.?

Quite frankly, on a personal basis, I am more concerned with the growth side of the equation.  In New Brunswick we were running significant deficits with no real GDP growth so the provincial debt to GDP ratio rose from a low of 25% in 2009 to 38.6% in 2018.  In absolute terms the net provincial government debt more than doubled.

Governments are not passive bystanders when it comes to economic development.   They need to work on the numerator of that equation – public debt – but they can’t ignore the denominator – GDP.

Without at least modest economic growth, the province will struggle to provide good quality public services and infrastructure (the one-time federal transfers boosts are nice but not guaranteed).