The new Labour Force Survey data finds Calgary has the highest unemployment rate among large urban centres in Canada at 7.4%.  This fact has led to an outpouring of angst on social media and in the press.  How could the mighty Calgary have fallen so fast?  It’s time to separate from Canada and flourish!

Relax.  This is a clear but a bit strange case of people using statistics to bolster their narrative and ignoring other statistics that might counter their views.

Here are some other facts:

First, I don’t like the monthly LFS data particularly for CMAs.  Let’s use the annual data to see some trends:

The number of unemployed people in Calgary has declined by 16% in the past two years.

The longer term picture shows an even more interesting trend.  Between 2010 and 2018, the Calgary CMA added 117,000 jobs – again better than all other metros except MTV.  To put that into some perspective, the Calgary CMA created more jobs than 18 other CMAs combined…. 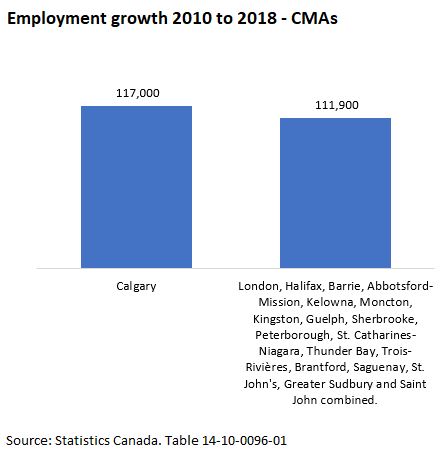 Now, lest I be accused of doing the same thing, I’m not suggesting that everything is rosy in Calgary right now although the Conference Board GDP estimates for 2017, 2018 and 2019 are fairly good.  The office space vacancy rate is too high.   And the bigger issue of the price of oil – which drives government revenue – looms over the provincial economy.

But to imply the Calgary economy is going over a cliff right now is not based on facts.