It’s interesting what kinds of things can motivate a population to mobilize.   The Miramichi is an interesting example.  Back in the 1990s when someone really wanted a Walmart they started a petition and got thousands of signatures which they promptly gave to Walmart and, in due course, the retail behemoth came.   Proposing changes to health care services or EI can also get you a rapid and large scale response.  The latest example was Renous’ bid to be Hockeyville 2019.  A tiny hamlet on the periphery of the ‘Chi gets so much public support that it wins the Hockeyville and was trending nationally on Twitter the moment it happened. 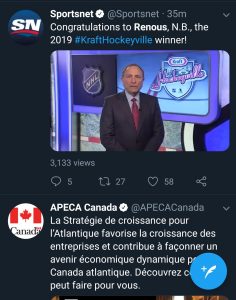 I am thrilled for Renous, of course, but is there anyway we could harness this public involvement and excitement for actual economic development in the region?   The population in Renous is dropping like a stone – the LSD shed 13% of its population between 2011 and 2016 and it is facing an uncertain economic future.

Why not develop a plan for the expansion of the Renous prison and gather thousands of signatures and petition Ottawa?  Imagine another 100+ great paying jobs in the area?  Or how about a deep dive into the potential of attracting tourism entrepreneurs into the region?  Are there mining opportunities out the Renous-Plaster Rock highway?  Could we get the populace engaged and excited?  How about a rally with thousands of people waving placards in favour of some new forests products operation in the region?  Or can we use all that Crown Land near pristine rivers to attract people to build hundreds of high end cottages and bulk up the seasonal tourist population?   Or, potentially hundreds of other ideas that might work taking advantage of the assets and attributes in the area?

The public will get really jazzed about Hockeyville but Sawmillville or FreeCrownLandleaseifyoubuilda$200kcottageville doesn’t really get people too excited.

It’s even hard to get government folks interested in economic development in the greater Miramichi so how can we expect to get the public at large engaged?  As far as I can tell there might be 1-2 people paid to do economic development in the Miramichi area.  Almost all the resources are dedicated to matching entrepreneurs and current employers to government funding programs with very little focused on actually figuring out how to leverage local assets and attributes for economic development.   In fact, as a little piece of irony, the ACOA advertisement right below an aging Gary Bettman announcing Hockeyville 2019 above, takes you to a link for the Atlantic Growth Strategy where you will find a long list of various government funding programs meant to help all kinds of existing businesses and people looking to start a business but you will have to look long and hard if you want funding to explore the Renous-Plaster Rock highway to see if there are new economic opportunities that could be exploited out there – matched to new entrepreneurs or existing firms.

We seem to have lost our appetite for economic development.  I’m sure even some of you, dear readers, think we shouldn’t put a nickel in rural areas.  Let them slowly die and focus on large urban areas only.   I’m not of this view.  I’m against structural subsidies to prop up smaller areas but if there are genuine economic opportunities in these areas that could attract investment and entrepreneurs – I’m all in.

Or maybe I should say, I’m all alone.