Charity may begin at home but it certainly doesn’t end there. The latest Statistics Canada data on charitable donations is concerning.

I have to start by saying religious institutions account for the bulk of charitable donations in Canada and the data released by Statistics Canada in this table does not show where the donations are going. I raise this because there could be sizable differences in the trend of charitable between religious and non-religious groups. At some point I will try to dig out this data.

But, in general, the trends aren’t good. 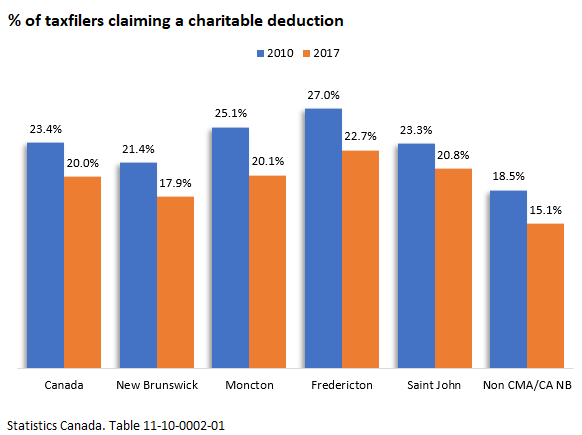 If you look at the percentage change in the relative number of taxfilers claiming a charitable deduction the drop is largest in Moncton where there has been a 20% decline. Saint John saw the smallest decline at 11%. 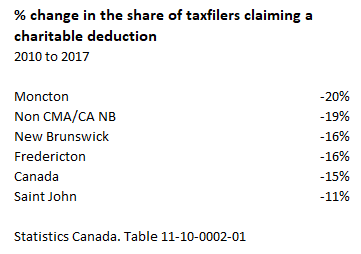 Moncton is also at the low end for median charitable donations. Again, the church donation thing may be clouding the data, but in general the median donation in Moncton is substantially below Fredericton and Saint John. 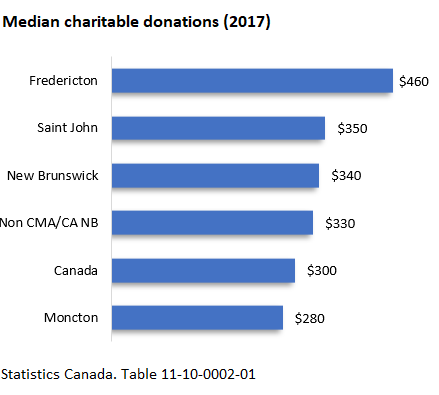 The other concern in the data is the drop in the relative share of young people who make charitable donations. In 2017, persons aged 25-34 accounted for only 7% of the total who made charitable donations down from 10% in 2010. Some of this relative decline is related to demographics but this does not account for the full story. Moncton, saw the largest decline in this age group. In 2010, 13 out of every 100 donors was in the 25-34 age group and by 2017 that had declined to only 8 per 100.

Saint John, interestingly, also ranks very low among the youngest cohort but much higher than Moncton among the 55-64 age group (29th out of 166). Fredericton is better, on average, than either SJ or Moncton but performs slightly worse in the 45-54 age group. The other three small urban areas – Miramichi, Campbellton and Edmundston have very high rates of donorship (relative to other areas in Canada) among the 55 and older age group but among the lowest in Canada at the younger end of the spectrum. Again – some of this is accounted for by demographics – there are fewer young people – but this does not tell the whole picture. 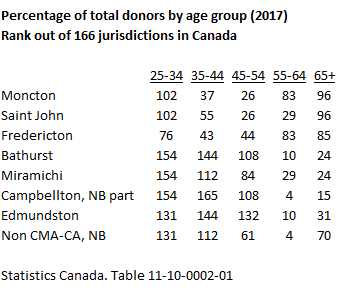 The bottom line here is that we are donating less to charitable organizations, the amount we donate is not keeping up with inflation and young people are donating even less than they were before.

For me this is an important issue. I haven’t analyzed the volunteerism rate lately (a cousin to charitable giving) but the last time I looked the numbers were trending downward – among younger NBers as well.

We live in a global age. If you look at the media and entertainment content consumed by the average young New Brunswicker – almost all of it is external to the province. In an era where putting down roots and caring about the local community is more important than ever, we are seeing a greater disconnect – less and less people care deeply about the place they were born.

When I was writing the economic growth plan for the provincial government a few years ago, I put a whole chapter in on encouraging more volunteerism and charitable giving. My logic was simple. We have a wave of people retiring that will likely live another 20-30 years on average and they will have time on their hands – why not find ways to encourage them to volunteer their time to good causes? At the same time, we want Millennials and young NBers to engage in their local community. But the whole chapter was removed I think because it didn’t paint a very rosy picture of charitable/volunteer activity in the province. I was disappointed as there is so much potential to engage NBers in making their province a better place – economically, socially and environmentally.

So what do we do? I think we need to target young people in particular. No one is asking them to become Mother Theresa but if everyone does a little bit – 5 hours a week volunteering, maybe a few hundred dollars a year in donations – we could help address many of the thorny issues.

My own interest lies in economic volunteerism (quelle surprise!). I’d like to see boomers with specific skills – financial, engineering, leadership use these skills in a volunteer role to help a social enterprise, etc. I work with a lot of not-for-profits and many times they can’t afford to pay for these competencies. I’d like to see more retired business leaders volunteering time to help young entrepreneurs. I’d like everyone to volunteer to help ensure newcomers are properly integrated into our communities.

In the end, strong communities are key to successful countries. In Canada, volunteerism/charitable activities has been a third leg of the stool – along with government and the business sector – to ensure we have strong communities.
If we give up and say “who cares about Edmundston? If things get worse, I’ll just move to Kelowna.” I think we are hurting not only our communities but also ourselves. If we care more, we will get better outcomes.