When I was a kid my parents used to read me a nursery rhyme that included the phrase “went a-marketing” which I took to mean go buy stuff at a store.  The term has evolved over the decades to mean the business of promoting and selling products or services.

For long time readers of this blog, you will know my frustration about the marketing industry in New Brunswick.  New data does not cheer me up.  Total industry revenue from advertising, public relations and related services in New Brunswick in 2017 was $31.8 million down slightly from 2013 while most provinces witnessed growth over the same period.  In Nova Scotia, industry revenues are up 12% and in Ontario up 26%.

On a per capita basis, New Brunswick has the second lowest revenue from this industry of all 10 provinces.  The standard argument is that we are ‘too small’ and larger firms from away scoop up lucrative NB clients and we can’t compete in export markets.  Well, maybe, but Manitoba, Saskatchewan and Nova Scotia generate substantially more industry revenue and are not much larger than NB. 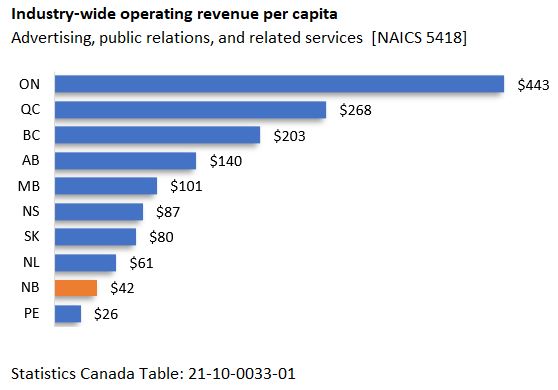 The GDP contribution is an even more relevant statistic because it points to the economic value from the industry that stays in New Brunswick.  The GDP from advertising, public relations and related services has actually declined over the past decade (real GDP expressed in 2012 dollars) by 22% while rising robustly in most other provinces. 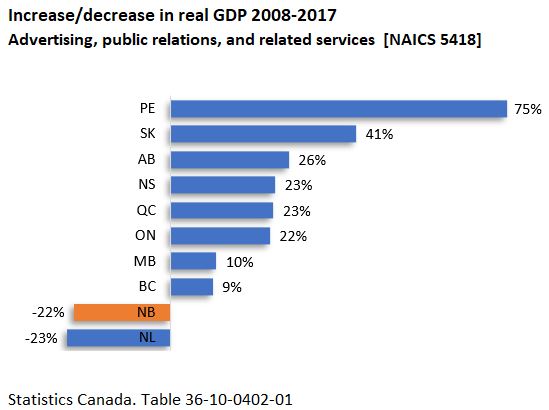 I had coffee last week with a very interesting guy in the marketing and communications business who moved here from half way around the world and brought some of his client work with him.  When you do work in New Brunswick for a client outside the province that is an export activity.  Including both interprovincial and international export revenue, New Brunswick firms did generate about $8 million in 2015 (the most recent year data is available) but adjusted for population size that was dead last in Canada among the provinces.  Look at Nova Scotia – generating almost 4x as much export revenue compared to New Brunswick (per capita). 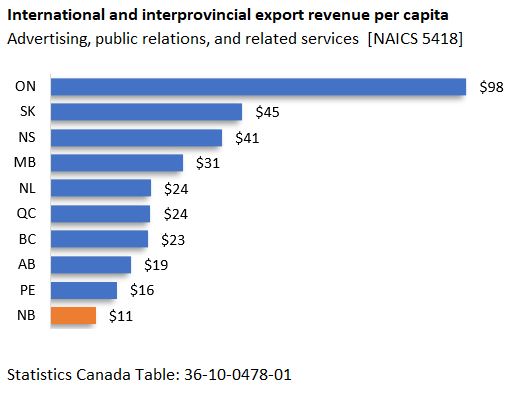 We have hashed the debate over and over.  The loss of NBTel hollowed out the industry.  Government tourism business contracted outside NB.  Fragmentation in the market.  No interest from economic development organizations.  An industry-led effort to work cooperatively a few years ago fizzled.

But the bottom line is that there are a lot of creative types in New Brunswick – and many, many more – leave to do this kind of work in Ontario and elsewhere.  I suspect that many of them would be just as happy to do that work in New Brunswick.

Maybe it is time to take another look at this sector.   How has Nova Scotia been successful in this area?  Even Newfoundland has double the export revenue.  Why?  Can we import more talent like the guy mentioned above?  If so, is there a way to package up a bunch of small players and sell services cooperatively?

1 thought on “Why can’t New Brunswick benefit from the ‘a-marketing’ sector?”