The big apple
On relatively short notice I decided to take the family to the Big Apple between Christmas and New Years.  I knew it would be busy but in fact it was downright crazy.  Everything was teeming with mostly frustrated tourists.  Doesn’t matter where – Battery Park/WTC, Times Square, Rockefeller, 5th Ave. – even Central Park – throngs of tourists.  Finding a restaurant, washroom, getting into stores – the simple things – were challenging.  Without any data to back me up its seems to me that Airbnb might be distorting the tourism market there.  The number of hotel rooms traditionally acted at least somewhat like a brake on any tourist surge in New York City but with Airbnb -maybe that natural ceiling is broken.  Bottom line?  There were many places we went to that were easily well beyond the maximum number of people allowed by City Hall.

There are few lessons for New Brunswick’s tourism sector to be gleaned from NYC but after hearing families screaming at each other as they elbowed their way through the cattle cars that were the streets of Manhattan, I realized that part of our tourism pitch should be opposite of the large urban pitch.  Less waiting, reasonable costs, open spaces, avoid the madness – come to New Brunswick.

That won’t dissuade most of us from visiting the centre of the universe but it it might make some folks think twice. 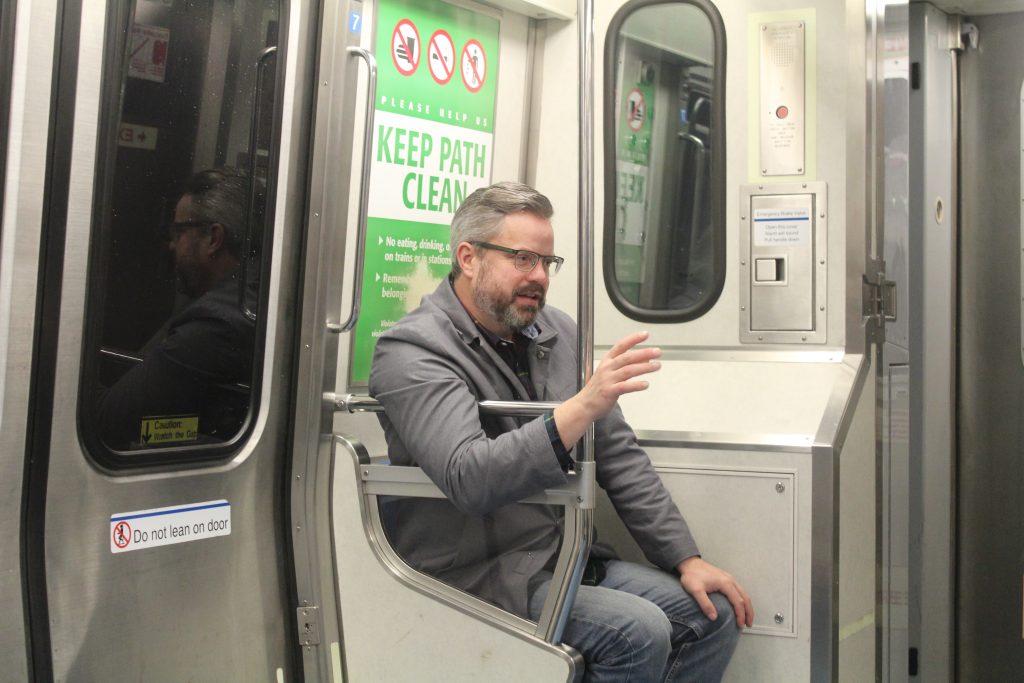 Me lecturing my kids on the PATH train from Newark to Manhattan.  Photo credit: Alice Campbell

Government incentives in the background?
I was surprised to read a job advertisement in Fredericton that openly discussed the Youth Employment Fund.  It states on three separate occasions that the firm is using the YEF to push up wages from slightly above minimum wage to $15/hour.  It looks to be some kind of warehouse/processing operation – retail fulfillment playing on the Amazon brand to reel in workers.

The YEF was set up to help firms hire young people and give them work experience to help advance their careers.  It wasn’t meant to be a structural and ongoing wage subsidy.  When I read this job ad – that is what I sense.  A firm that is looking to use government funds to push its hourly wage costs below minimum.  I hope not.   Using government support to provide internships, coop work and other experiential learning for young people to get experience learning a skill is a good thing.  Using it a kind of structural subsidy is not.

The ‘role of government’ grudge match
One of my favourite podcasts going back more than a decade has been EconTalk hosted by Russ Roberts.  Roberts is one of the leading voices among economists that believe government needs to be restrained and he has weekly guests across the spectrum leading to lively and thought provoking discussions.  He recently interviewed Mariana Mazzucato who is gaining traction in her call for a more robust role for government in shaping markets and fostering innovation.   It was a civil conversation although she claimed after she had to restrain herself.

My problem is that I find myself liking both points of view.  I think Mazzucato is winning many converts. Many people see the public interest in economic development and want government to play an active role.  On the Chinese end of the spectrum you have government declaring the country will the “world leader” in industry x or y within 20 years and putting massive resources against that goal.  That has a certain appeal particularly in areas that are falling behind.

Unlike most of my colleagues, I spend several years in university studying under professors pushing public choice theory and Austrian economics.  The prof that I worked for during my MBA program didn’t think governments needed to own roads and that private banks should issue money.  While these two specific examples seemed a bit strange to me I do remain a believer in free markets.   But at the same time I understand Mazzucato’s point of view.

What I find particularly interesting is that in everything I have read and heard she isn’t a virulent basher of capitalism and free markets.  She just wants government to play a more direct role when needed to drive innovation and the public good.

I never understood why many people wanting robust public health care systems, expansive social safety nets and excellent public infrastructure are also those quickest to bash markets and the profit motive.  If the goal is to have a robust enough economy to generate the tax revenue to pay for all this public largess you would think these folks would be staunch supporters of capitalism and celebrating innovation, the resulting surpluses and the tax revenue gleaned from them.  For some reason it is more likely for the advocates of strong publicly funded services to be bashers of capitalism and private industry.  This seems to me self-defeating.

This is not to say, as I have stated many times before, that all business is good, all entrepreneurs are noble, etc.   We have to be able to walk and chew gum at the same time.