Sunday morning sermons can be a little bit frustrating for people who actually pay attention.   You will hear a steady stream of counter-intuitive axioms such as “the first shall be last”, “to live you first have to die”, “to be rich you need to be poor”, “to save your life you first have to lose it”, etc.    When confronting my man (or woman) of the cloth these get defined to me as “deeper truths”.  Concepts that require more thinking beyond the superficial.  It’s fairly easy to see how a millionaire is rich.  It’s harder to see how mother Theresa was rich.  But if you grasp the second you are closer, as they say, to real riches.

Sorry to pivot from the sacred to the secular, and relatively pedestrian, but there are similar truths that apply when looking at economic development.  One deeper truth is that the economies that have the workforce to fill ‘lower paying’ jobs tend to be stronger in the longer run.  Particularly since the Boomers started to retire and the national economy started to completely rely on immigration for labour market growth.

Take a look at three examples: tourism, administrative and support and transportation.  All three sectors are not particularly high wage or high skilled but are growing strongly in Ontario, British Columbia and to a lesser extent Manitoba.  Now it is important to point out this is a short sample – three years – and from the Job Vacancy survey which would not be as robust as, say, the Census.  But it is important for illustrative purposes.

Payroll employment growth in the accommodation and food services sector has been robust in Ontario and BC and that has pushed up the national growth rate to seven percent over the three year period – seven times faster than New Brunswick.  This is not all tourism-related, of course, but a good proxy. 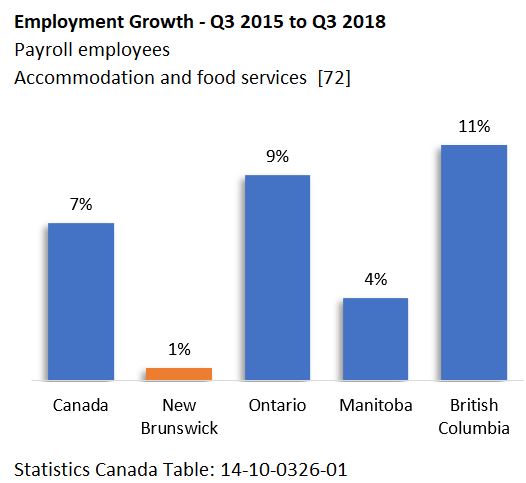 Then look at administrative and support services employment which includes contact centres, travel agencies, and a variety of other fairly low wage administrative-related employment.  Booming in Ontario.  Down in New Brunswick. 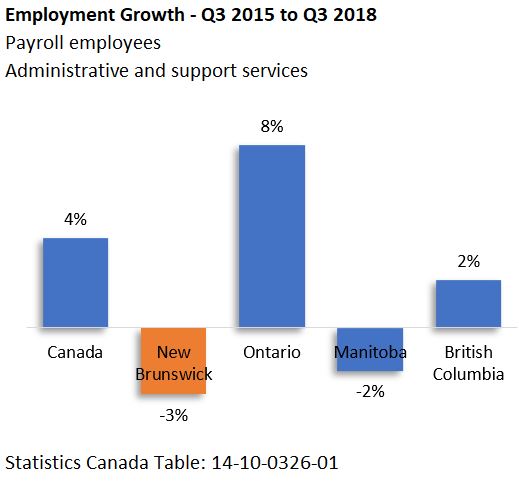 Then look at transportation and warehousing.  Fairly straight forward – truckers, warehouse workers, dispatchers, etc.  Employment is up strongly across Canada and barely budged in New Brunswick. 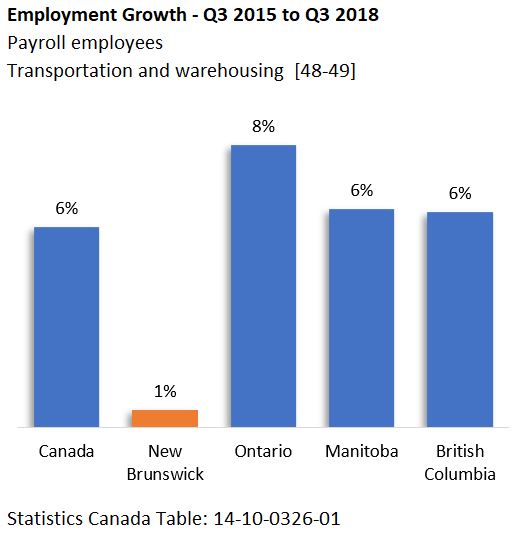 The typical response is: “why do we care”?  Let Ontario have the ‘low end’ jobs but this is where the deeper truth comes in.  If you aren’t filling those jobs, in the longer run you dampen economic activity and risk holding back growth in higher wage sectors like health care, education, finance, etc. that rely on a growing economy and population.

Now, the good news from the Job Vacancy survey is that finance and insurance jobs in New Brunswick are actually up strongly in the past three years (discussed in a previous blog) but that is heavily related to export-based activity and not local market activity.  Health care and public administration jobs are up 12% and 13% respectively over three years but, again, those sectors at least in the longer run are tied to overall economic and population growth so can’t sustain out-sized growth indefinitely without broader economic growth.