You are familiar with the 80/20 rule which can be applied in many circumstances such as 20% of customers account for 80% of revenue or 20% of volunteers do 80% of the volunteer work, etc.

In New Brunswick, I would posit another rule is starting to take shape – the 60/20 rule.  No, I haven’t lost my ability to sum basic numbers nor is there a missing 20 percentage points.  My 60/20 rule is not a percentage.  It is a raw but hard numbers game. 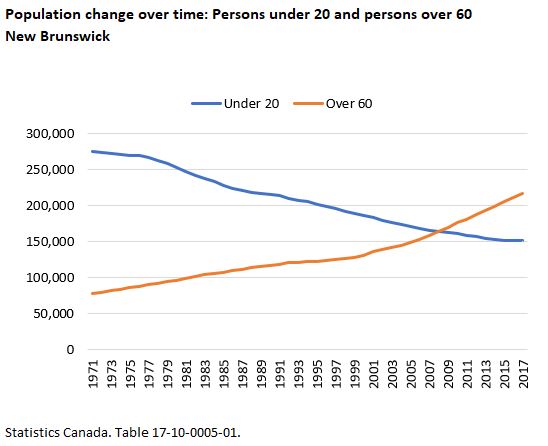 What does that mean?  Well, it means the median age of a voter in New Brunswick is now around 56-57 based on my estimates.  To define it – half the voting population (assuming voting shares by age remain similar) is over the age of 56.  To suggest age does impact how people vote would be quite naive.

I’m not suggesting there is all out war between the grannies and the Beliebers (Google it, grannies).  In fact, I would say that anyone over the age of 60 would be highly offended if it was suggested they put their own interests ahead of the kids.

But there is something called human nature.  I would suggest the 60/20 rule is impacting views on immigration, on any kind of government reform – health care, education, municipal government, and particularly on economic development.

I still remember that CBC reporter who went out to Stanley a few years ago and asked folks in a coffee shop/restaurant what they thought about the Sisson Mine.  Most of the responses (at least then) were quite ambivalent – one lady said something to the effect that there was no one out there now that needs a job in the mine but maybe it would bring young families into the area.

Imagine in 1971 if a firm was proposing a new $600 million mine and hundreds of jobs paying 70% above average.  I would suggest at least among most there would be jubilation.  Now, at a minimum a collective shrug- the more recent public engagement out there has been sharper with people who have moved into the area to retire suggesting the reason they moved here was to be left alone to retire in peace (paraphrased).

How do we break the 60/20 rule?  It’s a challenge but I hope that older NBers (I just passed the 50 year mark this year) keep an open mind as young people and families flow into their communities from elsewhere in the world, or someone proposes a new economic development opportunity, or someone wants to undertake some potentially risky but innovative approach to public service delivery (Sackville 2020 for example), or politicians use dog whistle politics to rile them up to muster votes.

The long term risks are equally damaging to the over 60 population as the under 20s.   A weak economy not generating enough tax revenue to pay for high quality public services and infrastructure will hurt us all.