There have been several stories/columns in the national press recently arguing we could be on the cusp of a populist movement in Canada like that seen in the U.S. and more recently in France. As I have written before, I dub this the Twisted Sister effect (we’re not gonna take it, anymore). Most of these experts focus on the growing ranks of disaffected men who are losing their high wage blue collar jobs and working in Amazon warehouses.

While I welcome this kind of analysis, I think we have to be careful to avoid trying to fit the facts to our narrative. Yes, there are challenges in Canada. Yes there are many that are uncomfortable with the pace of change and that feel things are being foisted on them. Yes we are seeing the loss of high paying blue collar jobs in manufacturing but at least until recently this was offset somewhat by an increasing number of high paying blue collar jobs in natural resources development (SK, AB, BC mostly).

In New Brunswick? The median household in the richest county (Kings) earns only 57 percent more than in the poorest county (Queens) – Census data. Not sure that portents a populist uprising at least on economic grounds here.

We have other issues roiling such as the lack of growth in much of the province, the shrinking workforce, no recent history of immigration, etc. but I don’t think income disparity is a huge issue here – at least based on the data.

In fact, I think the ‘rich’ are more likely to rise up in New Brunswick (tongue firmly implanted in cheek here).  We have far fewer ‘rich’ people in the province (define this as you wish but based on the share with $200,000 or more in annual income) than all but one other province and they are grumbling about taxes and generally feeling unloved these days (had coffee with one last week). 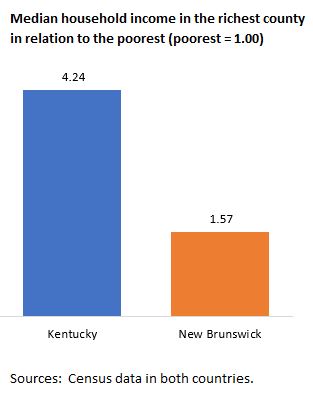 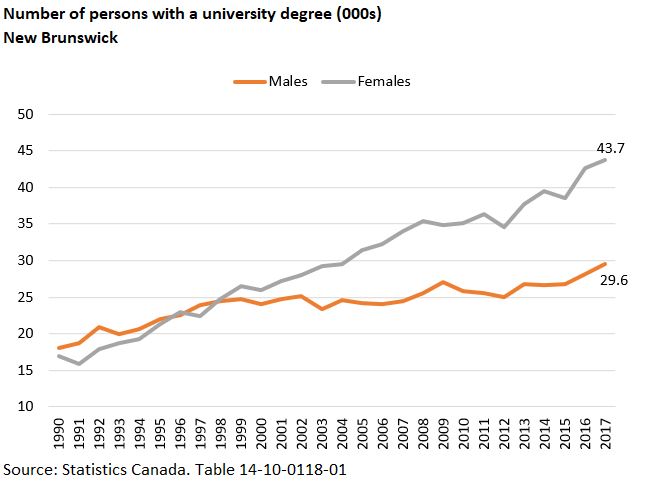 Will this disparity grow? – the university enrolment data would suggest the answer is yes.

What does this mean?

I don’t know.  It is already leading to significant changes in family dynamics – who earns more in a relationship, etc. and even in a small way child care – more men staying home but this is more of a trickle than anything else.  Will there be broader social impacts over time?  Women wanting pillow talk about politics and culture and men wanting to talk about monster trucks and wings night at the pub?