For me the potential gypsum mine in Upham is an ideal example of the challenges we face in this province particularly with rural economic development.

As I have stated many times before, I believe there will be cases where a mining project should be rejected because it poses an above average risk to the natural environment or for other factors.  As well there should be an open and transparent process that decides these projects. Further, I also believe that the view of local residents should be an important consideration in the decision.

But there seem to be fewer and fewer advocates for economic development in these smaller communities.  Someone can set up Save Upham Facebook group and committee (which is their right) but there seems to be few “I love the mine” Facebook groups.  And the media tends to be cautious when reporting about these projects.  Although I will say the most recent story I read discussed in great detail the trees, watercourse, noise and trucks on the road but didn’t mention the economic opportunity, job creation, new income flowing into Upham.

As I have also written about many times partly this is a sign of the times.  In the 1970s when Upham was much younger (on average), I assume people would have loved to see $75,000+ jobs in the community.  Now, people want to live in a pristine place and work elsewhere.  Of the 345 people that have a formal place of work who live in Upham, only 20 actually work in Upham.  In another universe there would be lots of folks that would love a good paying job close to home. 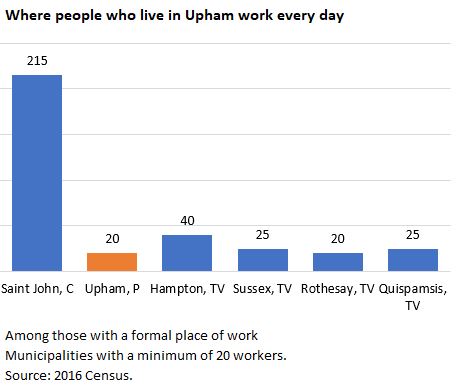 The number of people who are unemployed and live in Upham has dropped by 43% in the past 20 years.  At the time of the Census only 80 people out of 1,045 adults 15+ were unemployed and I suspect even that had something to do with seasonal jobs.

So who will advocate for this project?  The elected mayor?  Nope. Upham is an LSD.  Local business leaders?  Which ones?  There are only 16 businesses in all of Upham (with employment) and only one has more than 10 employees.  One farm with paid workers, two small trucking firms, two tiny logging firms and a few construction contractors.  That’s it.

We need advocates for economic development.