The old saying “you are entitled to your own opinions but not your own facts” keeps coming to mind when I read commentary about ‘incentives’ used by government to encourage certain behavior by businesses.

First of all, the commentary this week in the paper than insinuated that New Brunswick widely uses property tax breaks for corporations while putting it to residents is untrue.  There are a very few property-based tax incentives for business in New Brunswick.  There are a few legacy ones such as the oil tank farm in SJ but in general almost none.  Now GNB doesn’t levy a property tax on what is in buildings (i.e. the equipment) like a few jurisdictions in North America.

Second, most of the large U.S. incentives given to business are either tax-based or related to corporate taxes paid.  Amazon is in the news because of HQ2 and the $1.52 billion worth of incentives over 10 years just for the New York location.   In New Brunswick, these firms would pay much lower corporate income tax to begin with.  In many U.S. states upwards of 20% of total state government revenue comes from corporate income tax.   In New Brunswick it is less than four percent.  My point is that when government looks to attract industry here and they are ‘competing’ with a $1 billion corporate income tax incentive – the firm would have likely only paid a couple of hundred million in New Brunswick (apples to apples).  So is that a $800 million incentive? 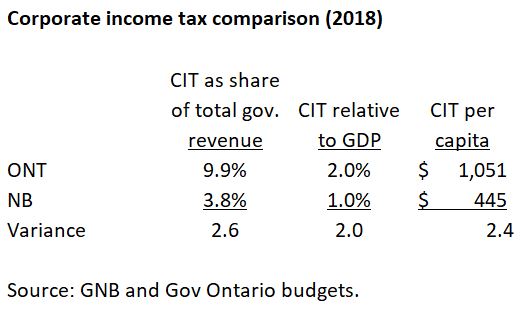 This is a digression from the initial theme but an important one.  Ontario generates slightly higher personal income tax as a share of the budget 23.3% compared to 19.2% in New Brunswick which makes sense because of the higher incomes in Ontario (even though top marginal tax rates are lower).  Ontario generates a little more HST revenue as a share of the budget even though the provincial sales tax rate is lower -again makes some sense because of the higher personal incomes.

But more than double corporate income taxes even as rates are lower?  I have never received a good answer about this.

It matters because if we were generating 9.9% of total GNB revenue from CIT it would cut our need for Equalization payments by over 30%.

Back to my core theme about truth in incentives.  New Brunswick doles out a few bucks here and there to firms – usually in the range of $10,000/job or so.   There are multiple studies that show NB gives less money out in the form of incentives than most other provinces and certainly most US states – using the broad definition of incentives.

I have said before if all the provinces and states got together and agreed on a framework to eliminate state aid to firms, I would support that.  It would be fiendishly hard because governments disguise incentives in the form of R&D, training, ‘public’ infrastructure, etc. but if they could agree I think it would make sense.  But I don’t agree with unilaterally disarming on this.  If an incentive of x dollars brings in five times that amount in incremental tax revenue over 10 years and if our competition is offering even higher incentives – why unilaterally disarm?  On principle?

Do you think a firm would make a major investment decision based on 0.8% or 1.7% of total costs?   No.  Incentives are mostly a goodwill gesture meant to help with upfront location costs.

New Brunswick needs to work on its core value proposition.  You can’t gloss over a weak value proposition with a few bucks worth of incentives.  If New Brunswick is a great place for investment – in mining, in aquaculture, in cybersecurity, in IT, in energy, – whatever – we need to package it up and sell it to the world.  Trying to induce firms to come here and make multi-million dollar decisions for a few thousand bucks worth of incentives is a losing strategy.