In 1921, there were 4.3 million acres of farmland in New Brunswick or about 11 acres per person living in the province. By 2016, according to Statistics Canada, the total area of farms had dropped to only 835,000 acres – a decline of 80%.  Your first response will be that this is a trend across Canada.  You would be wrong.  The total acreage of farmland across Canada has risen slightly over the nearly 100 year period (up 13%).  Your next retort will be that in 1921 it was all small farms providing individual families with sustenance and that would be more true.  The average farm size in 1921 was 116 acres and now it is 370.  Across Canada, the average farm is now 820 acres reflecting mostly the large scale operations in western Canada. 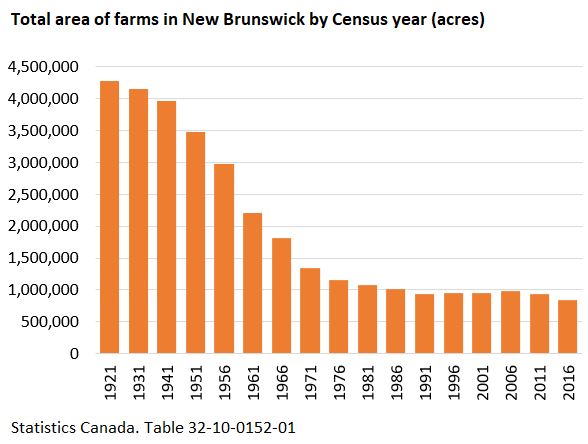 Why has all this farmland disappeared or gone fallow? Has there been massive urbanization encroaching on agricultural lands like parts of Ontario? No, New Brunswick’s urban centres have expanded very little over the past decades.  Hardly enough to put a tiny dent in the agricultural land.

Why am I talking about farming when the title of the post is “Should NB communities have more control over their destiny?”

Because agriculture is a perfect example of why local communities should be far more engaged in their own economic development.

By my estimation there is both underused agricultural land and a growing number of farmers aged 60 and older looking for a way to transition out of farming with no children interested in taking over. So, why not put together an inventory of available land, the size potential of the farms, the potential crops/animals that could be farmed profitably and then take that to Europe and try to attract another wave of immigrant farmers to our province?

Right now that would the responsibility of the provincial government.  I think it should be led by the local community.  The mayor sets up a task force on the future of agriculture in the Salisbury area, engages local volunteers and farmers to join the task force which spends three months going door to door gathering intelligence on the potential to attract a new wave of immigrant farmers to the region.

They package this information up and take it to the Immigration folks at GNB and I almost guarantee they would happily promote those farming opportunities in Europe.

So why isn’t this done?  I don’t have a great answer except that over time the view has been that because we are a small province, economic development activity should be centralized in Fredericton.  Another answer might be that some experts have said we need to urbanize so we shouldn’t think about development opportunities in non-urban areas.

A few weeks ago a friend of mine took me on a drive of the Dorchester area in southeastern New Brunswick.  I was fascinated.  He told me about all the proposed development in that area in the 1960s and 1970s.  He took me to the industrial park (now just trees and dirt roads).  Showed me where the floating dock was in the Petitcodiac River.  We drove by the old copper mine and the site of a proposed munitions (?) factory.   There was a proposal to build a third Kings Landing/Village hstorique acadien in that part of New Brunswick.  Apparently Irving Oil had looked at putting a tank farm in the area.  We drove by the now all but empty Atlantic Industries factory complex.   Then he told me about all the potential that still exists for development.   The fibre optic hub, the natural gas connection point, the tourism potential, agricultural opportunities, potential ways to leverage the prison for new economic activity.   The First Nation down there could be a partner in new investment opportunities.

Who is working on all this?

Nobody.  A few volunteers trying to muster some basic information.

Another friend of mine took a part time job related to economic development in the Woodstock region.  Within weeks he had identified multiple projects that could possibly have been sources of significant new investment in the area.  How many people are working on these projects.  You guessed it.

A old friend of mine moved to Albert County – a tiny rural area – and just loves it.  And other people are buying up the cheap housing as old timers pass on.  They love it too.  I told him that Albert County used to generate a lot more economic activity than it does today.  Shouldn’t somebody be working on Albert County economic development?  There is a massive stock of maple trees in the area with some commercial development but a fraction of what we see in northwestern NB.  Who is working on it locally?  You guessed it.

As old people pass on, people from across Canada will decide to retire down here because of the cheap housing and pristine rural setting.  They will expect high quality health care, road maintenance, broadband, subsidized electricity, low property taxes, etc. but chafe against any economic development.  We have seen this play out in Albert County, in the Stanley area and elsewhere as retired folks from away have said they just want to be left alone.

Take a look at the interprovincial migration rate for the Dorchester Parish and Village – 15% of everyone aged 5+ living in the parish in 2016 lived elsewhere in Canada in 2011.  They are buying up cheap housing or building on cheap land and many of them “Just want to be left alone.” 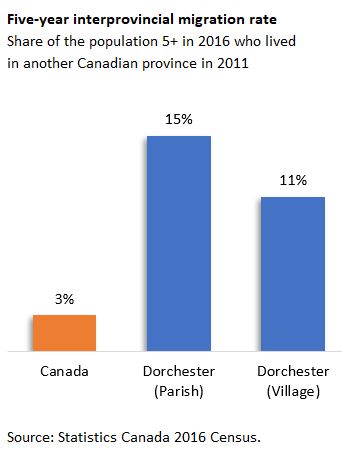 We need provincial level economic development.  Absolutely.  The province is way too small to have every small community out trying to attract international investment, as an example.  But the development of local opportunities should heavily involve the local community.

Let’s get a wave of local stakeholders and citizens engaged in the development of their own economic future.