My friend’s proposal is intriguing.  After watching multiple projects die or be delayed for years, he has decided that New Brunswick should set up a Crown Corporation to do the early stage work on non-renewable resource projects such as mining, natural gas development, etc.

This Crown Corp would do the initial site development work, ensure all the necessary infrastructure is in place, obtain all permits and licenses, negotiate with First Nations where applicable and complete broad consultations with the local population as prescribed by government regulation.   The Crown Corp. would then serve up the project to the market and ask high quality firms from around the world to bid on taking over the project.

Essentially, the idea is to de-risk these projects from most of the government- or political risk.  Each project would still face market and technical risk but private firms are normally well positioned to handle these risks.  If they aren’t, they go out of business.  But the risk that a politician will change their mind, or a bureaucrat will gum up the works or various community groups will mount a large scale insurgency or international advocacy organizations will pump money into a jurisdiction to stop projects – firms aren’t particularly good at managing that risk – nowadays they try and muscle their way through it with bags of cash and persuasion but I agree with my friend that it might not be the best approach for the firm or for the jurisdiction.

The natural response to this proposal would include several concerns 1) why should the taxpayer pick up that front end cost with no guarantee of return; and 2) how would it work in practice?  Right now it is set up purposely as adversarial – so that the regulator or government is perceived to represent the public interest and the company the market interest.  How does that work when government is both?

For the first question, it is a question of risk and return for the taxpayer.  If the new Crown Corp is successful it will foster more private sector investment, good jobs and significant new tax revenue.  If not, you shut it down after a period of time.

For the second question, well, the Canadian government owns a pipeline that will need to be approved.  Nalcor in Newfoundland and Labrador takes equity stakes in mining and oil and gas projects and they still have to go through a rigorous approval process.   When you go through the series of things that have to happen it seems to me it would be fairly straightforward.

It is unlikely that government would move in this direction.  Politicians have become so nervous about virus-like public reaction they would bristle at this idea.

But the truth is that New Brunswick used to generate 7-8% of its GDP from mining and now that figure is down to less than one percent.

Across Canada in 2017, the provinces and territories generated $146 billion worth of provincial GDP from mining, quarrying and oil and gas extraction.  New Brunswick generated 0.2% of that total.  Even if we saw a 10 fold increase in the GDP from this sector it would still be less than our ‘share’ of the national GDP. 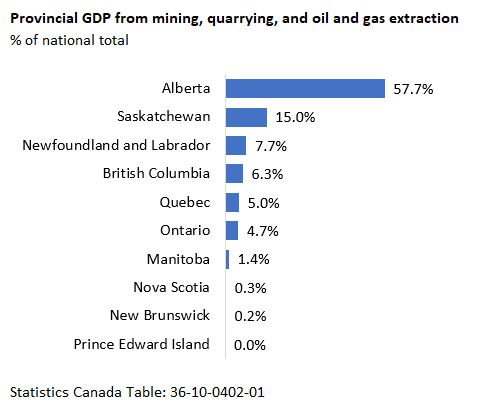 I think my friend’s idea is worthy of future discussion.