The paramedics are responsible for the longest period of economic stagnation in New Brunswick in recent history. And, they have caused the provincial labour market to start shrinking after decades of strong growth and, to top it off, they are responsible for New Brunswick having the most turbulent provincial political environment among the 10 provinces across Canada over the past 15 or so years.

For a 26 year period starting in 1981 and ending in 2006, the New Brunswick economy grew by an average annual (inflation adjusted) rate of 2.5% a year.  Not stellar growth but solid growth.  This expansion was fueled in large part by an expanding labour force as young people graduated from high school, college or university and wanted to work.   In fact, some people argue we had a surplus of labour and that is why so many left over the years.

As the figure shows, labour force growth has also collapsed in recent years and, in fact, has turned negative – peaking at 395,200 in 2013 and dropping to 383,900 in 2017.  It is set to decline further as the Baby Boomers start to retire in full force. 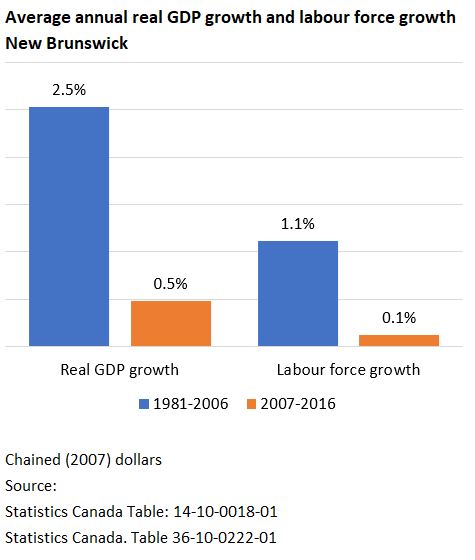 So, why blame the paramedics?

Look at the political response.  Read the paper, listen to CBC.  What has been the top response by politicians?  We’re going to fix the paramedics.  That’s how we will endear ourselves to the voters and ensure a long and stable period of political harmony in New Brunswick for the next decade or so.

There was a headline that read something like “The first thing Blane Higgs will do as Premier” and I hoped to see a story talking about an economic swat team – the best and brightest minds put to work to solve this decade long puzzle – but nope.  His first action will be to fix the paramedics.

Of course much of this post is in jest because we all know that while the voters tell Don Mills the economy is their top concern (CRA polling), they don’t really vote that way – or at best this is an indirect rationale – they vote out of anger and frustration related to specific issues – paramedics, taxes, perceived fairness, etc.

But the truth remains.  New Brunswickers are restless and I think it is at least loosely tied to the economic crisis.   They see it in their local community.  The nursing home can’t find workers.  A foreign-looking and sounding worker suddenly showed up behind the counter at the local Subway restaurant even as little Jonny sits on the couch playing video games because he “can’t find a job” that interests him.

Think about Brad Wall.  The most loved Premier over the past decade plus – he resigned with 70% approval ratings – practically McKennaesque. Why?  He 1) presided over a period of rapid economic growth and 2) he was seen by his constituents as a tireless champion for the province – standing up to Ottawa, and fighting for his province.

IMO, carbon taxes, glysophate, paramedics, nursing homes  et. al. are just flash in the pan issues that will have some effect on the economy and government finances but in the end if we don’t solve the shrinking labour market and if we are not able to encourage investment in new growth industries we will be right back at the polls again and again and again.

No one really knows what another 10 years of 0.5% growth per year will do to the province.  The last 10 years saw a doubling of provincial government debt.  Another doubling along with a rising interest rate environment would not be good.

Of course, the federal government could save our bacon.  It could offer 6-7% increases in transfer payments to make up for the structurally weak economy here.   Unlikely but I guess theoretically possible.

One of the biggest issues is that government officials (elected and bureaucrats) don’t really believe government can do much to positively impact the economy.  They see economic development as government setting up a pot of cash and doling it out to businesses in the hope they expand.   When the economy doesn’t grow the response is that it is hubris to think that a government can actually shift the trajectory of an economy – at least in the short run.

I’m sympathetic to that view in general but there are very specific ways government – right now – can positively impact the economy.

There are many other examples but you can see the common theme is that they all involve government policy – and not just doling out government cash.  In fact, most of the opportunities above wouldn’t require direct transfers of cash from government to industry.

Or we can sit around debating how to whip the paramedics into shape.