The 1980s comedian/actor Rodney Dangerfield used to say he “gets no respect”.  Sometimes I feel that way about New Brunswick.  When you eat at a restaurant in New York you order “Nova Scotia  salmon” even though Nova Scotia doesn’t actually export salmon – New Brunswick does.  No one orders “New Brunswick salmon” it’s Atlantic Salmon.  We are big players in lobster, salmon, blueberries and increasingly oysters but we aren’t able to link those to the New Brunswick brand.

Think maple syrup.  The following is from WestJet’s inflight magazine.  It is a nice story on Canada’s maple syrup industry. Notice what the author says about the industry – “in and around Quebec, Ontario and Nova Scotia….” 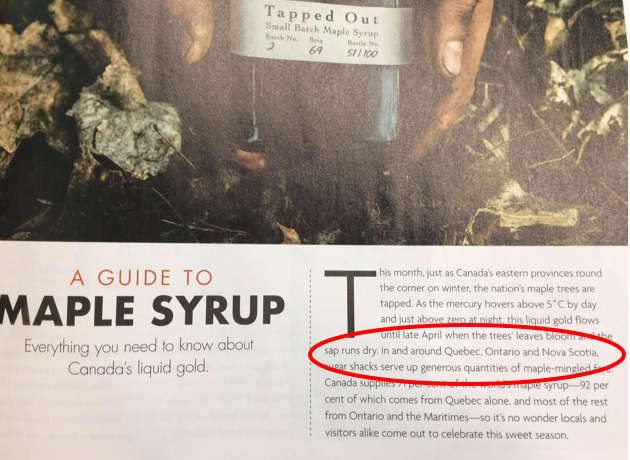 The only problem, like salmon, Nova Scotia doesn’t actually produce a lot of maple syrup. New Brunswick produces 10 times as much maple syrup compared to Nova Scotia and considerably more than ONTARIO and, yet, the author – probably a Toronto-based travel writer – doesn’t even know the basics of the maple syrup industry in Canada.  Now it is possible that Nova Scotia paid to be mentioned in the article but that is highly unlikely.

The truth is that New Brunswick doesn’t tell its story well – bottom line – end of story.  We are a global leader in the production of Atlantic Salmon, a top global producer of wild blueberries, a global leader in maple syrup production, an emerging oyster producing location, a top producer of high quality potatoes – and I don’t think most New Brunswickers even know this – let alone myopic travel writers from Toronto.

There are New Brunswick trees on the international space station for crying out loud.

My brother was at a retirement seminar in Ottawa and was told ‘Moncton is the #1 place in Canada to retire”.   I asked a group of business people in Sarnia a few months ago to tell me what they thought about Moncton – all overwhelmingly positive comments.

New Brunswick may not be the south of France but it is a great place to live and work.  We just need to find a way to better tell our stories.  When people read about Nova Scotia maple syrup in WestJet’s inflight magazine even though it is a bit player compared to New Brunswick – we have a problem.