At some point during the Lord of the Rings trilogy, I don’t remember exactly, Viggo goes into a dark and dreary forest and finds an army of cranky undead and enlists them to fight against the armies of Mordor.  As I recall it gets a little hairy but eventually the cranky old men come to the aid of the world of men and they all live happily ever after.

There is similar army of policy zombies in New Brunswick.    Their profile is pretty straightforward.   They are mostly men aged late 50s to early 70s.  They were roughly mid-career during the McKenna years.  They worked for government, were journalists or had other careers where they were involved in the development of public policy.  They are mostly quite smart, well read and still follow the news closely.  Many are retired on comfortable government pensions – although I suspect the former journalists not quite so comfortable.

I mention the McKenna years because many of them look back fondly on that period and believe we have gone down hill since then.  A minority, however; are rabid anti-McKenna-ites who believe he actually started the slide – that things were getting better through the Hatfield years (last five years notwithstanding) and McKenna-era style and policy started the slow descent to where we are today.  I would suggest the latter are not nearly as numerous as the former but they exist.

The problem is that now all they do is snipe from the sidelines.  Twitter and other social media give them a broader platform – although not that broad – but they are active and highly critical.  They believe New Brunswick will never change and they have given up hope a long time ago.

From time to time I hear from these guys.  Some of them I used to work with when I started my career in the aforementioned McKenna era.  They think I serve up stale, superficial pablum and get cranky that I even write at all.

I have sympathy for the zombies.  They have watched the provincial economy stagnate in recent years.  They know real GDP growth in the province since McKenna resigned ranks 10th among the provinces.  They know that labour market growth in New Brunswick since 1997 has been worst among the 10 provinces by a wide margin.  Cumulative labour market  growth over the 20 year period has been 8% in NB – next closest is NS at 12.7%.  Across Canada, the labour force has grown by over 30%.  They have seen per capita provincial government debt increase since 1997 faster than all other provinces except BC and Alberta which doesn’t really count because their debt is so low relative to the provinces from Manitoba eastward. 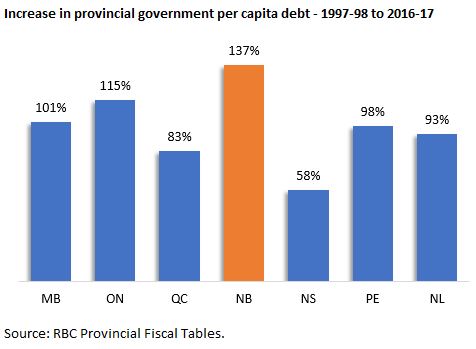 Some of them are frustrated about shale gas (both ways).  Some are  angry at NB Power.  Most are angry with the provincial and federal government.  The are moderately comfortable but supremely frustrated.

So what’s a zombie to do?  Most will live another 20 years or so and have a lot of talent.  I’d like to see these zombies get back in the game in some way.

If the goal is to help the province – they would be much more valuable helping than sniping from the sidelines.  As Spock says in one of the Star Trek movies as a matter of cosmic history it is much easier to destroy than to create.

We see some of this.  Daryl Branscombe’s Coalition of Concerned Citizens is New Brunswick’s response to the Traveling Wilburys but they genuinely want to use the horsepower around their table to add value to the process.  We need more of this not less.

Get in the game.  Yeah, I can be accused of phoning it in.  Occasionally my writing is a bit sloppy and superficial.  But after 25 years of this stuff I still think we can move the needle in the right direction.

Project out 20 years.  If New Brunswick is much more multicultural, if its urban centres are dynamic, if a next generation of ambitious entrepreneurs has emerged, if we have a strong economy that is generating the tax revenue to sustain good quality public services and infrastructure then you, dear zombie, can take pleasure in your dotage that you played a small role.

2 thoughts on “Calling all you zombies”