To clear things up DBRS did not downgrade the bond rating.  It confirmed New Brunswick at A (high) and R-1 (middle) but it changed the trend from stable to negative.  This matters because in the fairly arcane world of bond rating agencies every single word has significance.

DBRS concludes GNB debt is a little more worrisome because there no big investment projects and a shrinking labour market – making the province vulnerable to shocks.  Sound familiar?

What does this mean? It’s actually pretty simple.  New Brunswick has to issue hundreds of millions of dollars worth of bonds in a typical year (for new debt and to roll over some of the $14 billion in debt that comes due) and if the bond rating agencies get more cranky that will lead to higher interest rates – meaning the cost of servicing the debt will go up – kind of like personal interest rate if you have a bad credit rating.

But facts are facts.  As shown below we pay a lot less today as a share of the total budget on interest payments (service of the public debt) than we did 15 years ago because of lower interest rates. 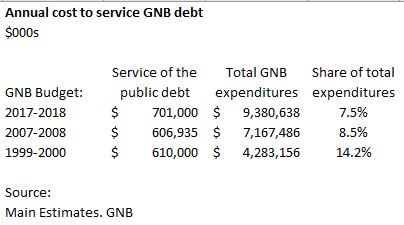 1 thought on “Why the bond rating agencies’ opinions matter”