Someone asked me about the wage gap between New Brunswick and Ontario after reading my column this week.  Happy to accommodate.

If you go back to the 1950s, depending on the measure you use the wage ‘gap’ between New Brunswick and Ontario was around 40% – meaning on average you could earn 40 percent more in Ontario than you could here in New Brunswick. This is just wages – not net worth which has more factors such as the value of your housing, accumulation of savings, etc.

There has been a steady decline in this wage gap since.  In 2016, using Statistics Canada’s Survey of Employment, Payrolls and Hours the average weekly wage (including overtime) in New Brunswick was 10% less than in Ontario – up from 15% less a decade ago.  The table below expresses this as an index with the Ontario wage being 1.00.  Anything below 1.00 means wages are higher in Ontario and above means wages are higher in New Brunswick (average weekly wages).  We are really seeing upward pressure on wages in the sectors that are having the hardest time recruiting workers.  Look at truck transportation.  In 2006 there was a 19% wage gap with Ontario and that has essentially evaporated.  Look at grocery stories and building materials stores.  Already average weekly wages are higher here.  Nursing care is an interesting one.  There are many pushing for higher wages in this sector (and home care) as a way to draw more in to the workforce.  Government essentially sets the wages in this sector.  The average weekly wage in this sector is already 10% more than in Ontario.  How high should it go?   Computer systems design and services (the main IT industry) is another interesting example with wages now basically on par with Ontario.

An interesting counterpoint is insurance.  This industry is booming in New Brunswick as national firms are expanding their operations in this province serving clients across Canada – but the work is mostly back office and customer support which is not high wage which is why the index is going the other way.   This is a good thing in this case.  Would you rather have a few high paying jobs serving just the local market or a large, export sector bringing in several hundred million in revenue but with jobs that don’t pay as much? 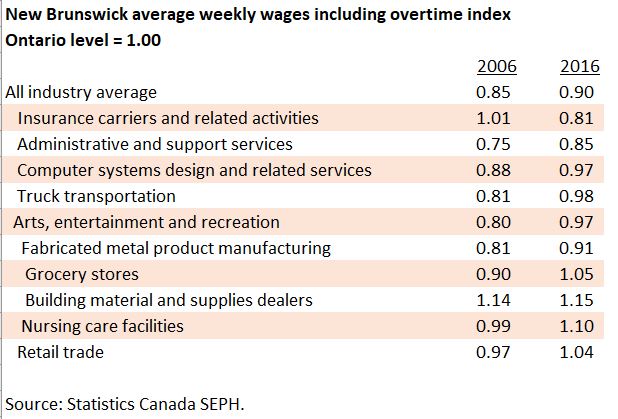 Of course there are usual caveats here.  Average weekly wages are not the same as starting wages.  But it certainly looks like Ontario is able to more easily fill jobs in the $12-$15/hour range than New Brunswick these days.  This is likely due to the high flow of immigrants and also likely why the Wynne government is moving to a $15/hour minimum wage to force up wages at the lower end of the labour market spectrum.

Rising wages are a good thing if they are tied to productivity and overall industry profit growth.  But in tight margin industries without productivity gains, the jobs that are mobile (i.e. those that can be done elsewhere like trucking) will leave if wage rates get too high.