There’s a story on the CBC website this morning about the plight of workers on EI that work seasonally at Kings Landing.  It’s unfair, they say, because they get fewer weeks of EI than their counterparts in the Village historique acadien.  The trusted federal government labour market economist patiently explained that the policy is that EI weeks are longer in areas of high unemployment because it is presumed to be harder to find a job in areas with high unemployment.

It’s time to stop the fiction that is the EI program – or to reform it.  The gentlemen complaining that their EI has run out live within a short commute of Harvey (unemployment rate of 43.9% from the Census) and Nackawic (22.4% unemployment rate).  They live reasonably close to Woodstock and Fredericton that have low unemployment rates.  According to NBJobs.ca there are more than 500 jobs on offer right now within a 50km radius of Nackawic.

But as the gentleman in the article implies he has no intention of working another job as his real job starts in May. He just needs EI to cover him from February to May and, besides as he says – who would hire him to work for just a few months?

From the Census we know that nearly 50 municipalities in New Brunswick have unemployment rates of more than 20%.  This should be a crisis of Grecian scale but there are lots of employers in those communities and surrounding areas struggling to find workers.  And the MP for that area is dutifully looking for a solution (i.e. so those workers can get more EI). 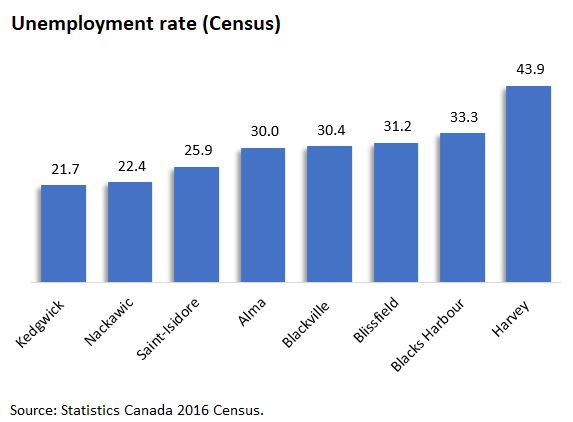 In 2015 there were 54,000 people that lived outside NB’s urban centres who collected EI at some point during the year or 37% of everyone that collected wages/salary income.  A large share of that 54,000 works seasonally and it is fiction to think they are ready and willing to work the jobs on offer in their communities and surrounding areas.

So we either a) reform the EI system to compel people to work even if they don’t want to (i.e. they work at Kings Landing for 5 months and Walmart for 7 months every year – its almost guaranteed that Walmart would agree to this arrangement; or b) we move the people on seasonal EI (i.e they have collected EI at least 3 years in a row) out of the labour market altogether and fund them separately with the understanding they have no intention of working outside of their seasonal job.

I believe the unemployment rates around the province would drop precipitously if we did this.

The problem here is more than just the fact that unemployment rates are distorted.  It drives broader government policy.  Why do we need immigrants when we have 40% unemployment in Harvey?  We set up ‘training’ programs for EI workers but they are really just a bridge to pay people between seasonal work.

It’s time to change this now.  I realize it is toxic for both provincial and federal politicians – the mighty federal Cabinet Minister Doug Young was brought down because of EI tweaks back in the 1990s.

This is no excuse not to act.  This issue is holding back our province and its economic potential.

1 thought on “It’s time to end the EI fiction”