I see that Quebec City-based Englobe Corp. has bought Crandall Engineering following a trend of national and international firms scooping up New Brunswick-based engineering firms (ADI, etc.).    It might just be me but it seems that an increasing number of New Brunswick firms are being scooped up by national or international firms.  New Brunswick’s dairies are now all owned by Quebeckers but we are seeing this trend in vision care, funeral homes, insurance brokerages, etc.

The engineering sector is a particular concern because at least some of the firm were actually doing export-based work from here.  In other words, the engineering sector was a high value, export sector bringing in several hundred million in export revenue each year fueling the salaries of highly paid engineers.  I hear Hatch has already left Moncton and there is a fear that over time Englobe will do more and more of the work that Crandall used to do in Moncton from Quebec.  They will keep a physical presence here but less and less highly paid engineers.

So far the Fredericton example is mixed.  I am hearing that some administrative and management functions in the engineering sector have moved to Toronto and Calgary but the Statistics Canada data suggests there are more engineering-related workers in Fredericton today then there were back in 2006.   In fact there are 27% more in 2016 than in 2006 as shown in the chart. 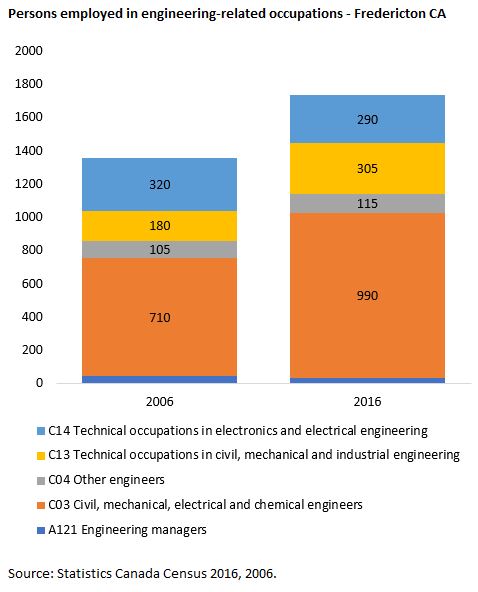 That is not the perfect statistic because at least some of these engineers work for government in Fredericton. But if you look at industry employment there are 1,115 persons working in NAICS 5413 Architectural, engineering and related services in the Fredericton CA (2016) up from 1030 in 2006.   We can’t get more granular than that with the industry data.  So, the industry is still growing in Freddy Beach but not as fast as the rest of Canada.  In 2006, 49 out of every 10,000 people working in this sector across Canada were in the Fredericton CA.  By 2016 that had dropped to 45.

The Moncton CMA already has one of the lowest concentrations of engineers and as I mentioned Hatch closed its Moncton operations (I’m told).  This is frustrating as 5-6 years ago they were talking about putting a ‘centre of excellence’ in Moncton.

As the national economy moves towards more of a services economy, exporting high value services is the next big driver of the Canadian economy.   Small places like NB are at a disadvantage but we have a proven track record of firms that can export services – accounting services, engineering services, business support services, IT services, etc. We are not good at exporting legal services, marketing/PR services, language translation services, etc.

It behooves local and provincial economic development agencies to build a strong relationship with the national and international engineering firms here and try and figure out what it would take to ensure they keep growing here.

1 thought on “Engineering economic development: Who’s got the power?”