Diane Francis loves to stir the pot. Her column, Grants to ‘fake startups’ won’t build Silicon Valley North. They will only spawn Bombardier-like boondoggles, got a lot of blood boiling – particularly in Atl. Canada for whom she lobbed some particular verbal grenades.

All I can say is that in the past few years, this region has done – the Maritimes – has done particularly well when it comes to the contribution of the IT sector to GDP growth. New Brunswick and Nova Scotia had a few years in the valley but between 2014 and 2016 the two provinces are leading the country for IT GDP growth.  Note that I excluded telecommunications (the C in ICT) because most of that GDP is from your spending on Netflix and cellphones.  I also exclude IT manufacturing (computers, etc.) because like just about all other non-natural resources-based manufacturing it is most done in Quebec and Ontario.

With these caveats something seems to be working right now in the Maritimes – fake companies or not. Maybe it is fake GDP? 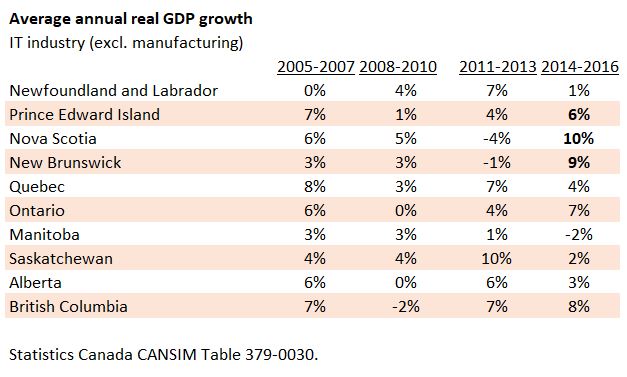 It is important to put  things in perspective.  The entire IT sector in New Brunswick (as defined above) contributed $370 million in real GDP to the province in 2016 – or 1.4% of total GDP.    To put that in context, if the IT industry doubled its GDP contribution in a single year it would only boost provincial GDP by 1.4%.   We need, IMO, to get back to 2-3% GDP growth per year in this province so don’t expect the IT industry to do the heavy lifting. 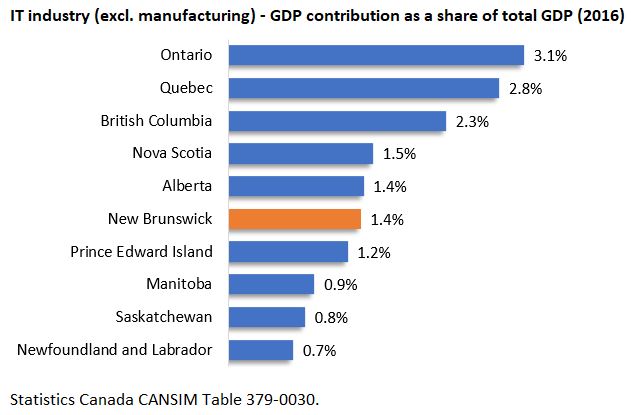