We have been debating the curious lack of young entrepreneurs in New Brunswick for years. It’s hard to define the term ‘entrepreneur’ but if you look at self-employment as a proxy – New Brunswick has always had well below self-employment rates among those aged 35 and under.  Across all sectors of the economy there are 36% fewer persons under the age of 35 that identify themselves as self-employed on the Census.

When you look at high value sectors such as IT, engineering, accounting, consulting, etc. the young person self-employment rate across the board is well below average in New Brunswick.

If you go a little deeper and look at urban centres, the data doesn’t get much better although you have to be even more careful because Statistics Canada reports employment by industry data in increments of five so for sectors with small levels of employment the numbers can be a bit out of whack.  For example, Statistics Canada reports there are no people self-employed in the Moncton CMA in software development in the age cohorts 15-24 and 25 and 34  Technically there could be 2 in the 15-24 age group and 2 in the 25-34 age group – 4 in total – and it would be showing up as zero in the Stats Can data.

With that as a caveat – and an issue facing all urban centres – New Brunswick’s urban centre still have low rates of self-employment among young people (under 35) particularly in strategically important sectors.  The following table compares the combined self-employment in three IT sectors – as a share of total employment in those sectors then compared to the national level.  Moncton and Saint John are at the low end of the spectrum.  Fredericton isn’t listed because it is not showing any under 35 self-employment in these three sectors (again subject to the increment of 5 caveat above). 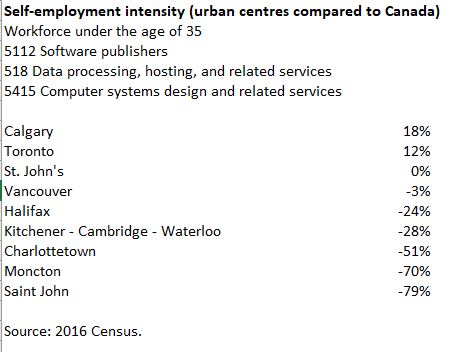 There could be problems with the data itself.  It’s hard to believe there are only a very few if any self-employed people in Fredericton under the age of 35 in these three sectors.  I don’t ask people their age but I have met a number in the past couple of years that must be under the age of 35.  But this wouldn’t be a problem in the province-wide data where the number are larger.

But the bottom line remains.  Using this data it would seem there are far fewer young (under 35) tech entrepreneurs in New Brunswick than average despite the fact that almost every city has beautiful facilities with colourful couches and young, smiling faces ready to help you reach your potential – not to mention earnest government officials with their chequebooks at the ready.

As I mentioned above we have been debating this for years.  There are many reasons cited: 1) Some say young NBers are encouraged by parents to ‘get a real job’ because of the historical uncertainty around the economy: 2) Others say we export our entrepreneurs (Dr. Haan’s research shows you are far more likely to own a business if you were born in NB and leave than born in NB and stay); 3)  Some say it has to do with the structure of the economy –  more rural, lower levels of professional employment overall – means less potential for entrepreneurship.; 4) Some even suggest – with some international data to back it up  – that a lack of entrepreneurship is self-perpetuating.  A person with a parent that works for themselves is far more likely to go into entrepreneurship; 5) Some blame a lack of immigration – self-employment rates among immigrants are higher – particularly in ‘tech’ sectors; and 6) Finally, some point to the lack of large industry ‘incubators’ that are traditional sources of entrepreneurs (for example there are DNA links between the former NBTel and something like 50% of the tech. firms in New Brunswick that have reached any kind of scale).

Who knows.  It could be, and likely is, a combination of all these factors and more.

But the bottom line is that we are not seeing the next generation of ambitious entrepreneurs arising in the province.

Just to be clear this is not just about ‘young’ entrepreneurs. Overall rates of self-employment (all age groups) are also lower.  For the IT sector, there are 58% fewer self-employed in Saint John, 67% fewer in Fredericton and 44% fewer overall in New Brunswick when compared to the country as a whole.

Instead of spending all our time studying the ecosystem itself – sources of funding, incubators, cluster effects, etc. I think we should spend a little more time on the front end – where do entrepreneurs come from?  And what role, if any, should governments, educational institutions, the research community, etc. have to influence this pipeline?

We need to see more high value IP-based startups coming out of our universities (Dr. Shukla is working on this in Fredericton as one example).  We should see if our large industrial players have any potential to foster high value startups in their supply chains (Dave Grebenc, et. al. working on this) and we need to see if there are high value entrepreneurial opportunities that could emerge as the result of New Brunswick being a really good place for certain growth industries (cybersecurity, smart grid, etc.).

Maybe we need to attract a lot more entrepreneurs to our shores.  I know that will sound like heresy to some but if we are exporting entrepreneurs – like Haan surmises – maybe we should start thinking about importing a few.  Then the question becomes why would they want to come here?  Now we are starting to have a real conversation about economic development.

4 thoughts on “Where are the young entrepreneurs?”