Among the population 5+ (for obvious reasons), Shediac is the only municipality in the top 10 for intraprovincial, interprovincial and external migrants among New Brunswick’s municipalities (I only looked at those with at least 3,000 population).  All told, nearly 25% of everyone 5+ living in Shediac in 2016 did not live there in 2011 – just five years’ previous.  That is pretty remarkable.  Contrast this with Shippagan where only 5% lived outside the municipality in 2011 or Tracadie where only 7% did.

Want to know if your city, town or village made the cut?

Shediac featured the highest level of intraprovincial migration followed by Sussex.  Despite the challenges of the potash mine closure a lot of folks are moving to Sussex.  We don’t know from this data if it is retirees or folks living in Sussex and working in Saint John or Moncton.  The Studholm Parish is also adjacent to Sussex.  Why is everyone moving to Greater Sussex?  Moncton in this case is the Parish – not the city.  Cheaper taxes. Up mostly on a hill. 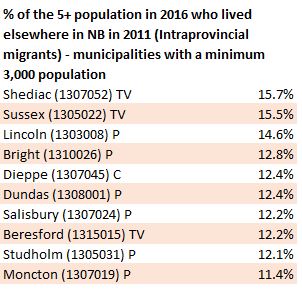 Which municipalities attracted the most people from outside New Brunswick? Oromocto, of course, but it is an outlier.  Why 10% of the Burton population is from outside New Brunswick is a mystery. Nearly 500 people live in Burton now that lived elsewhere in Canada in 2011.  Likely the Oromocto effect (?).  Great to see Woodstock here and also in the external migrant (immigrant) top 10.  Woodstock is becoming an interesting place – a bit under the radar.  We have friends that moved there recently for work. Overall nearly 1 out of every 5 Woodstockians in 2016 did not live there in 2011.  Also cool to see St. Stephen as it has been pushing to attract folks from elsewhere in Canada.  It’s working, folks! 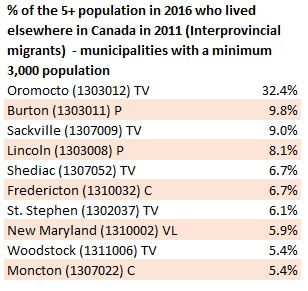 On the immigrant front, Fredericton leads the with Woodstock a close second – giddy up. Moncton, Saint John and Dieppe rounding out the top five.  Good to see Edmundston in this list – the percentage is low but moving in the right direction. For now only Woodstock and Edmundston are attracting any level of immigrants – outside the big three urban centres and their surrounding municipalities. 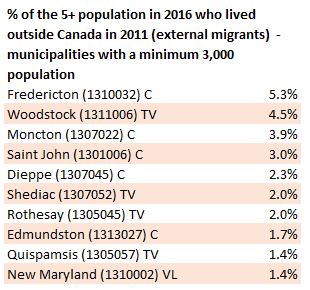