One of my problems is distraction.  I’ll be crunching data for a report or presentation and stumble on a tangential piece of data that is interesting.  For example, the new annual Labour Force Survey data for 2017 recently came out and includes some interesting trends.  But I decided to go back 40 years to look at long term trends. In 1977, I was 10 and used to walk to the convenience store in lower Lincoln near the airport to buy grape and orange flavoured potato chips.   I suspect only a handful of my readers will remember that short-lived but interesting snack food trend.

But most of the net growth in the female workforce has been concentration in a few sectors.  As the table below shows, 40 years later than are 5,300 more men working in health care and social assistance but more than 33,000 more women.  If you think there are more men in education these days you would be wrong.  The distribution may have changed (i.e more male high school teachers) but the overall number of men in education has not changed in 40 years while the number of women has risen by nearly 9,000.

Women still are not going into construction and manufacturing in any serious way.  The incremental number of men in professional and business services has out-paced women over the 40 year period.  Along with construction, those three sectors are the only industries where men have outpaced women in net growth. 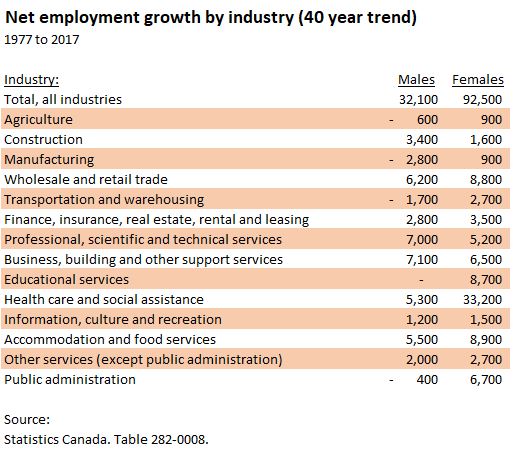