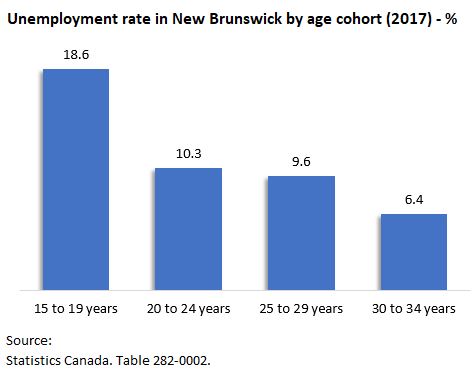 We can use Census data to dive a lot deeper on this issue.  When you look at the actual number of unemployed in the 15-19 age group around New Brunswick you find only 150 unemployed in the Moncton CMA, only 100 in the Saint John CMA and only 140 in Fredericton.  If you drive around each of those communities you will find help wanted signs in restaurants, retail stores, etc.  I’m just trying to put the 18.6% unemployment rate in context.

Among those 25-29, when you look regionally the absolute numbers are also quite small.  There are lots of potential reasons why the unemployment rate among that cohort is too high including a mismatch between skills, interests and the jobs on offer in local communities.  The EI system is likely boosting those numbers a bit.  A new immigrant I chatted with recently lost his job and was told “not to run out and get another job to hastily” and to “take your time and enjoy the time off with your family”.  He ignored that advice and got a job in a few weeks.

My fear, of course, is that the perceived (and actual) higher unemployment among young people in New Brunswick will keep us from focusing on addressing real labour shortages around the province.