Okay,  I posted earlier this evening that Saint John has the largest IT sector measured by the number of people working in the IT sector as a share of total employment.  It was pointed out to me that lots of IT folks work in non-IT sectors, which is true and I have written about this in the past.  When you look at people working in IT occupations (regardless of sector), Fredericton has the highest concentration of IT workers in Atlantic Canada and the urban centre ranks 5th in Canada by this measure.  There are lots of IT folks working in government, for example.  Moncton improves in its ranking because it has fairly large IT shops within its big employers such as Medavie Blue Cross.  Saint John has some of this IT employment within non-IT sectors but not as much as Moncton or Freddy.

So, we can say with certainty that in New Brunswick Saint John has the largest IT sector by employment, Fredericton has the largest IT workforce and Moncton has a strong IT workforce with over 1,700 employed in IT occupations giving it a higher concentration of IT workers than most other urban centres in Canada ahead of places such as Guelph, London and Kingston. 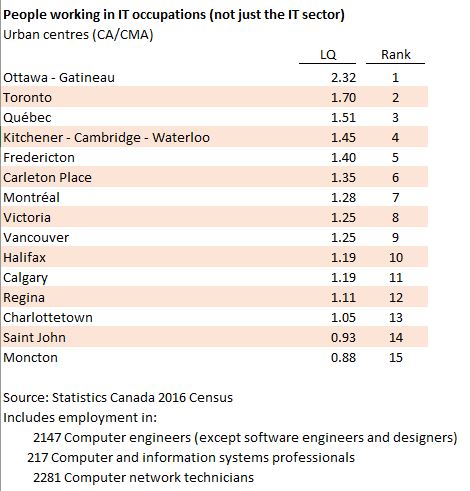