Maybe we will see more in the newspaper reports on this but my quick analysis shows something strange.  On the household asset side, we have seen steep declines in the value of RRSP holdings, deposits – a collapse in mutual fund/income trust assets and TFSA savings – substantial variations from Canada since 2012.

What happened?  Did all of a sudden NB financial planners become horrible at their jobs?  A 37% decline in RRSP assets in five years?  a 68% decline in mutual funds/income trust assets in five years?  Sure, they could be moving around some of the income – we saw a big increase in EPP value (for the group of people lucky enough to have one).  I would be curious to have an investment professional weigh in here.  We do have the data by income quintile but the figures for the higher income quintiles are not published for New Brunswick.  We heard after the government raised the tax rate on high income earners that high net worth folks were trying to shift income to avoid the tax – maybe leave more of it in the business, etc. (leading to the Morneau crusade?). Something’s fishy.  It’s hard to believe that in just five years you would see such big variances to the rest of Canada.

On the debt side I can’t quite figure out Statistics Canada’s data.  Only a 5% increase on the median value of mortgages on principle residence, a modest increase in credit card debt (from a low base), a decline in median line of credit debt, a decline in student loan debt, a modest increase in vehicle loan debt and declines in other debt – and still Statistics Canada is reporting an overall 26% increase in total debt. I guess my math skills are a bit sketchy these days.

The following chart shows the top line numbers.  Remember these figures are for those that actually hold the asset or debt – not everyone. 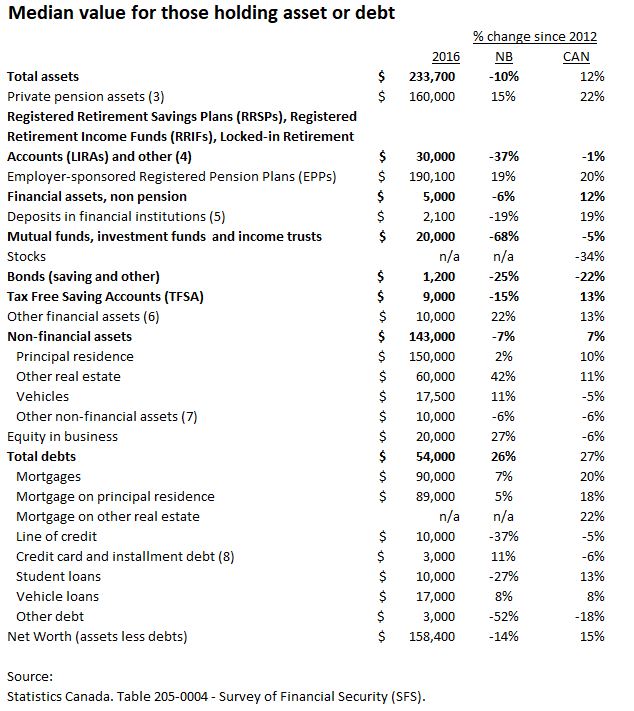