One of the issues we discuss very little in New Brunswick is the role of multinational firms.  When we do, many people derisively talk about how we need to ‘take care’ of our own firms and they express skepticism about why international firms would want to set up in New Brunswick unless they get massive corporate welfare.

One famous NB CEO, who shall remain unnamed but you will likely figure it out, a few years ago after winning his 99th award for business excellence got up and said something like “We don’t need any outside companies coming here and saving our bacon” and then decried provincial government efforts to attract firms. I winced – this is exactly the kind of crap that holds us back.  Of course, the great irony of this story is that this same CEO is now buying up firms around the world and, one assumes, making the case that foreign investment from his firm will be very beneficial to those jurisdictions.

This is among the most frustrating issues for me as it points to our collective self-confidence problem.  The question is not why would these firms want to locate in New Brunswick it should be why wouldn’t they want to locate in our province?

But our collective self-confidence problem aside, I was looking at some interesting data this morning that points to another important role for multinational firms in Canada – as drivers of R&D.

Statistics Canada looks the amount of total in-house research and development expenditures by firms in Canada by ‘country of control’ – either Canada or foreign. 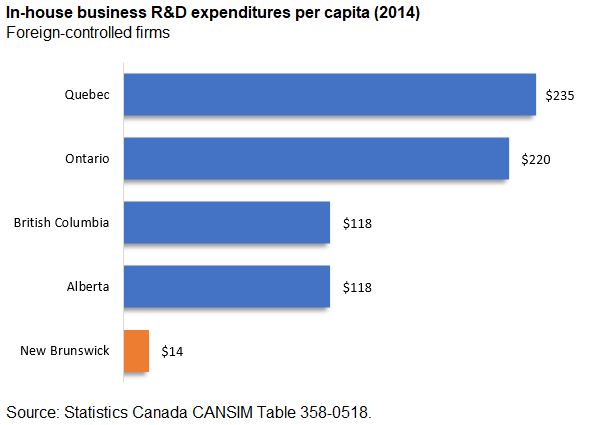 Siemens has something like 50 staff and a major global R&D centre in Fredericton.

We are pretty good at attracting contact centres and back offices and even the occasional IT firm.  Maybe we should sharpen our pencils and see if there is any potential to attract international R&D here.  Compared to the rest of Canada we are really missing the boat on this.

1 thought on “Attracting international R&D: In praise of Siemens”