For some reason there has been an increase in media reporting on the plight of older Canadians/New Brunswickers in recent weeks.  There are stories where the journalist (probably in his/her 20s) decries the fact that a 72 year old has to ‘work’ to survive.  As I get closer to my dotage I think this narrative needs a rethink.

Back in the mid-1990s I had a colleague who was likely in her early 50s and she had one of those multi-year calendars on her wall with her retirement date red circles 4+ years hence.  And she wasn’t shy to talk about how she was looking forward to retirement and the life of leisure it would afford.

My view then – and now – if you want a vacation take a vacation.  Take a long vacation.  But to be eager to retire and drop out of the workforce permanently – in your early 50s – is strange to me.  The concept of retirement at 65 started to take serious root when people were living, to around 70 years old (actually earlier but some of that mortality was due to war).  Now, people routinely live into their 80s and even 90s.

I know a couple who both were public servants and both retired in their mid 50s on one of those early retirement schemes to cut the short term deficit by ballooning long term taxpayer costs.  They are both in their mid-70s now and going strong.  It is highly likely they will have been drawing a pension longer than they worked (30ish years).

My father retired on the dot when he turned 65 because he wanted to make the job available for a young person.

We need to change the narrative here folks. 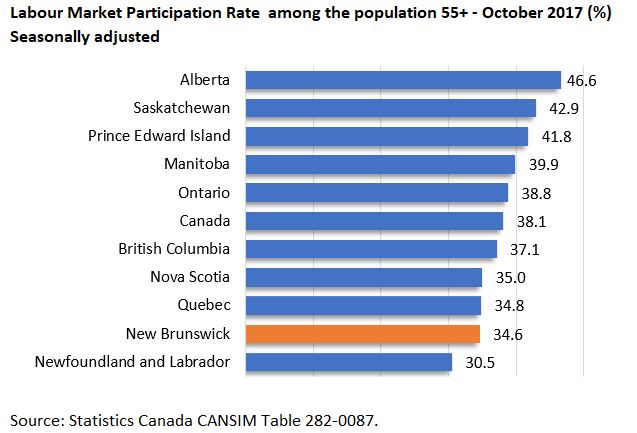 I hear many reasons for this:”it’s easier to live in NB just on your retirement income”, “EI props up older workers too”, “older New Brunswickers don’t want to work the jobs on offer”, “older New Brunswickers aren’t mobile – they can’t move out of their town because they can’t sell their house or because they have a spouse working or maybe they just prefer not to move” ,etc.

The nub of the argument is simple.  If we make public pensions lucrative enough that everyone can ‘retire’ in their late 50s or early 60s I think it would be a mistake.  I hope to be working as long as I can.  Hopefully as we age we can expand the definition of work – it doesn’t have to be an 8 hour day – every day.  It can be part time, part year, gig-based, etc.

I’ll end this on one final point.  We often times co-mingle the debate about poverty and older workers – I think to our detriment.

When I read about the 73 year old lady providing in-home care to a 90+ year old person I didn’t read that as a negative. My first thought was good for her.  She’s earning extra money and helping out a truly older New Brunswicker who needs it.

If we (or the 20ish journalist) cast that story as a tragedy – I think it’s a mistake.

I say good for you.

1 thought on “Putting the old fogies to work?”