I have historically be reluctant to weigh in on the issue of ‘bilingualism’ in New Brunswick.  It can be a polarizing subject with some believing we haven’t done enough and others suggesting it has gone too far.  But it’s an important issue so what the heck – I’ll throw out a few ideas.

I think it is time to have a public conversation about bilingualism.  It’s been 50 years since New Brunswick started to take this issue seriously and there hasn’t been much public discussion about it for 20 years – since the CoR came and went.

The vision of bilingualism has several components:

1) To ensure there are ample French language places and spaces across the province.  This point was lost on many English speaking New Brunswickers who thought bilingualism meant that everything should be bilingual – schools, hospitals, cultural spaces, etc.  I had a long debate with a guy one time who said newspapers, radio and TV should be ‘bilingual’. While that, in abstract theory, has some salience, in reality that vision of bilingualism tends to revert to English.  I have Francophone parents complaining their kids are tweeting in English, watching English TV and that English is spoken by many in the halls of high school.   It’s important to have French language places and spaces.   I think we have done a fairly good job at this but I think we should open up the conversation.

2) To ensure that people have access to public services (and hopefully even private sector services) in the language of their choice.  This doesn’t mean everyone speaks French and English but as much as possible we should strive to make this a reality.  There is no question we have made massive strides in this area.

3) To ensure as many as non-Francophones as possible have the opportunity to learn French – at least at a conversational level.   On this point I think we have essentially failed. Decades of official bilingualism.  Decades of putting upwards of 40% and more English kids through French Immersion and decades of government offering French language training to its workforce and the share of the population that indicates on the Census they speak both English and French has actually declined slightly over the last 15 years. 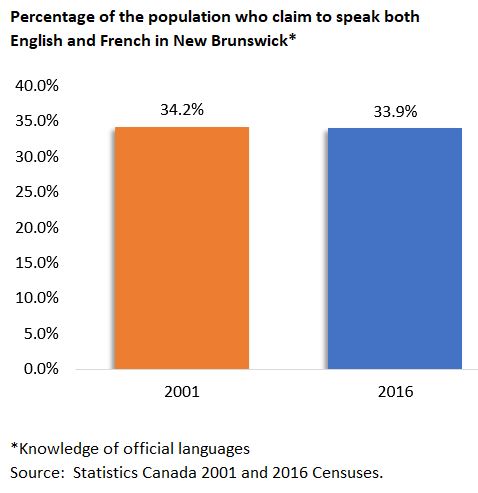 I’m not going to turn this into a long, winding discourse but the number of English only speakers in New Brunswick rose from 407,000 in 2011 to 421,000 in 2016 (this excludes all immigrants except those with a mother tongue English).  Decades of promoting bilingualism and there are fewer English people who claim to have at least a working knowledge of French today than 15 years ago.

What’s going on?  I have theories.  I think our French Immersion graduates are more likely to leave New Brunswick for good after graduation than unilingual graduates.  I know that sounds counter-intuitive because bilingualism is a real asset in New Brunswick.  But, remember, it’s also an asset in Ontario – and, in fact, across the country.

But my biggest concern is that we have not promoted the use of French among English speakers – even those that speak French.

Why can’t UNB offer French language courses so that French Immersion graduates can keep up their French?  If a UNB student took one or two courses a semester in French it would do wonders to keep up their bilingual skills. If it’s a question of French speaking profs – then do a deal with UdeM.  I would say the same for NBCC/CCNB – Immersion graduates should be able to carry on developing their bilingualism beyond Grade 12.

Why not offer some kind of incentives to encourage English people to learn and use the French language?  Even many new immigrants are given the choice – free English or free French lessons but not both.

Anyway, for this is the start of a conversation.  What does bilingualism 2.0 look like?  What does bilingualism 2.0 look like as we look to attract thousands of immigrants?   What does it look like when the number of born-in-NB Francophones is in decline?  Why are the great TV shows and documentaries published in French in New Brunswick not subtitled and promoted to Anglophone New Brunswick?  We need to have separate French language spaces and places – I get that.  But we need places and spaces where Anglophones can use their French language skills.

For me the bottom line is that bilingualism has been a success.  The rise and success of Acadie should be celebrated.  It’s a great story of a minority culture/language thriving.  But we now have to think about the next level.  We must get more Anglophones using their French.  We should start to see French Immersion graduates rising to the heights in government and the private sector.   We should be more creative in the promotion of French among Anglophones and immigrants (how about free and widely promoted French language training for all?).  And even in the school system where I know that a number of kids drop out of French Immersion – there should be a ‘lite’ version such that every child going through the English language education system should come out speaking at least a conversational French.

And for Francophones, don’t automatically shift to English. My wife and kids all speak French.  At restaurants and other venues they can respond to you in French.