Statistics Canada recently released its latest GDP and related figures for 2016 and New Brunswick has performed surprisingly well.  Business capital spending is still very weak but household expenditures are up and overall GDP is up modestly over 2015.  If you combine the GDP growth rates over the past two years – the provincial economy grew by 3.5% – above average among the 10 provinces. 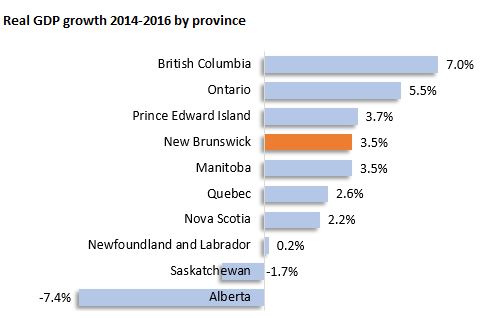 Statistics Canada provides GDP growth by industry – and that shows some important trends.  Again, combining the last two years of growth, transportation engineering construction saw a substantial boost in its GDP contribution (if you think there has been a lot of road construction recently – you are not wrong).  The GDP growth rate from aquaculture and agriculture has been impressive and, give me a high five, the forestry sector seems to be strong again with sawmill and other wood product manufacturing GDP growth strong and even paper manufacturing GDP up 10% over two years.  Let’s hope the U.S. duties don’t derail this success.  But my favourite growth sector has been ICT which witnessed a 7% GDP growth over two years but the most important component computer systems design and related services is up 44%.  Telecommunications GDP is down again by 1.5% following a long term trend downward. 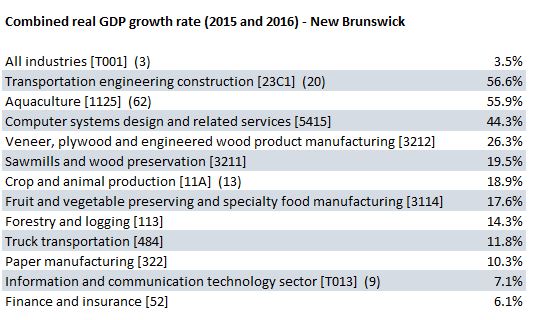 There are some worrying sectors.  R&D GDP growth has been modest.  Accommodation services GDP – the proxy for tourism – is only up 0.5% over two years.  The feds keep whittling away their defence spending in New Brunswick – the GDP contribution is down 15% since its high in 2010.  The contact centre industry (admin services) GDP continues its slow burn but it is only down 10% over the last decade.  This is better than many other provinces.

Our advertising and PR sector continues to collapse.  There’s not much to say about this except it is disappointing.

The biggest concern is architectural, engineering and related services.  The GDP contribution has dropped 13% in two years.  The national and international firms that bought out NB firms – may be retrenching out of NB.

1 thought on “A little good news, today (tip of the hat to Anne Murray)”