One of the reasons why the New Brunswick economy has been so draggy in recent years has been the lack of big scale capital expenditures.  For the better part of 30 years, starting with the Confederation Bridge, at any given time New Brunswick could count on having several of these large scale projects going on at any given time.  We had pipeline construction, new energy infrastructure, Lepreau refurbishment, a $2.4 billion new potash mine, a new LNG import terminal, wind energy investment, etc.  In the past few years, however we have had very little of that big scale investment.

If you back out public sector capital spending (which is down but has remained quite high), public sector investment in non-residential tangible assets averaged well over $3.2 billion/year. Now it is down to below $2.2 billion/year.  That may not seem like much to some folks but if you suck out $1 billion/year in CAPEX it hurts the economy now and dampens it for the future.

The following table shows this CAPEX trends but expressed as a share of national capital expenditures.  For most of the past decade, capital spending in the private sector in New Brunswick averaged more than $18 out of every $1,000 spent across Canada.  That is now down by 41% to only $10.67 per $1000 spent across Canada.  Public sector spending is still roughly at par with the rest of the country as a share of GDP (NB is roughly 2.1% or so of national GDP or similar to $20.47 for those of you who can’t follow my confusing math).  Private sector CAPEX, by contrast, is half what it should be. 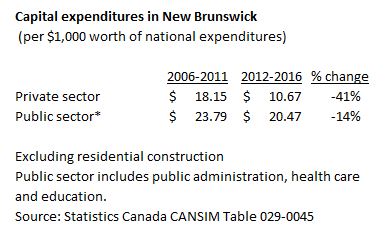 And this matters for more than one reason.  First you lose the economic impact of the investment itself (construction) but second most of these large projects generate an ongoing stream of economic activity as the asset is amortized over time.

So, if New Brunswick had the same level of annual capital expenditures since 2010 as we saw the previous decade  There would be nearly $8 billion more deployed right now across the NB economy.  That economic boost would have been significant.

As we look to the future we need to encourage more investment.  The loss of Energy East is just another example of a project that would have provided some of that needed new CAPEX.