The new Census figures on immigration out this week were not that surprising.  It confirms what we have been seeing – that New Brunswick’s urban centres are attracting more immigrants but having some trouble retaining them.

The more interesting data will come in late November (hopefully) when we see immigration by industry and occupation.  We are told that Canada only focuses on high skilled immigrants and that the points system favours those with a lot of education and skills.

Of course this flies in the face of actual data.

The point – that I have been making for a long time now – is that the larger urban centres have been attracting immigrant workers into sectors where they are needed and smaller urban centres are more constrained to the concept of the ‘high skilled’ immigrant.

I’m hoping the 2016 immigrant data will show we are flowing more into the sectors where workers are needed in New Brunswick. 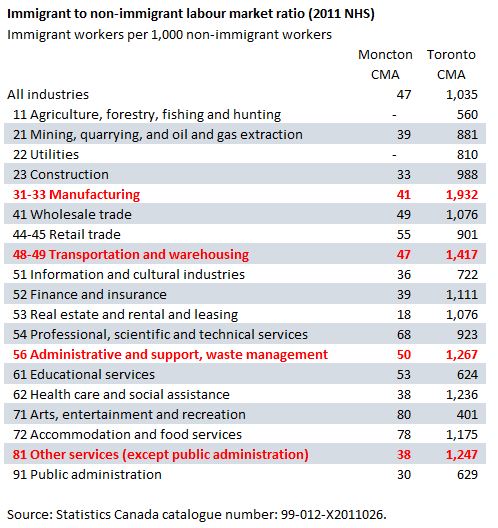 I’m a big fan of Herb Emery, the UNB economics prof – but I think – based on the article in the newspaper – he may be sending the wrong message.  His report concludes that policies to attract more immigrants won’t cause the growth of the economy.  His report is actually based on a pretty discrete chunk of data.  It is an important part of the conversation but I have a few counterpoints.

2. How would he explain the fact that the largest urban centres in Canada right now are driving employment growth across the country -and still attracting the lion’s share of immigrants?

To suggest that causality runs only one way is mistaken.  Export-based jobs will attract migrants leading to increased local demand and more jobs.  We agree.  But tightening the labour market to the point that employers decide not to expand in your community is an increasing risk.

I guess the common ground here is that I am not advocating we boost immigration without a plan.    As I have outlined elsewhere we need to fill empty jobs first – particularly in export-based industries.  We need a more intelligent approach to immigrant investment.  We should boost immigrant numbers in our PSE that align with our growth sectors such as cybersecurity and insurance.  This will send a strong signal to the national and international firms already here that the talent pipeline is expanding.

But I also maintain that immigrants themselves create demand.   Depending on the economy, 70% of all jobs are based on local demand.  If the population or overall wage growth is not strong – this dampens local demand.

Which side of the argument are  you on?

2 thoughts on “The myth of the skilled immigrant (?) Leveling the playing field”