The City of Saint John recently released a study they had completed looking at the property tax system that makes some interesting recommendations most notable for a significant rise in taxation of heavy industry, the assessment of equipment and machinery as part of the overall property tax assessment and an increase in municipal control over rate setting.   If we are going to have these debates we need to do so armed with good data.

My big theme these days is that New Brunswick is far more exposed to the global economy than ever before.  It competes with other jurisdictions with the export of our products and services, on the attraction of talent (everything from home care workers through to Phds), for federal government and private sector funding, for business investment, and for general influence over policies that can have profound impact on us.

In this environment it becomes incredibly important for us to know who our competition is and what set of policies and efforts are required to ensure we are competitive?

First, this is a fairly small timeframe – 2010-2015 – doesn’t mean we can project out for the next 20.  But it is a long enough time to allow us to speculate.  If you look at the data closer you see that many mid-sized urban centres in the orbit of the largest urban centres (such as Guelph, Waterloo, Drummondville, etc.) are doing quite well as are those that have a core, high value geography-specific industry (such as Estevan, Okotoks and Camrose) but urban centres that don’t fall into these two categories are struggling a lot more.

Why?  There are few possibilities.  First, historically these smaller urban centres relied almost exclusively on natural population growth and intraprovincial migration – very little immigration – to grow (BTW this is more of an eastern Canada phenomenon).   Now those two sources of population growth are drying up and they have to compete with the largest urban centres to attract immigrants – a much harder proposition.  The tightening labour markets are leading to the loss of industries that don’t “have to be there” for lack of a technical term.  Eventually it could lead to much greater decline.

Secondly, these communities are facing even more competition as discussed above.   I could list off for you more than a dozen firms in New Brunswick that have expanded manufacturing and other operations outside the province in just the past few years because in their calculus it made more sense to expand out there than back home.  I get that and government shouldn’t try to brow beat firms into bad business decisions.

But, we need investment here.  According to KPMG’s annual report on competitiveness around the world, New Brunswick firms already pay high property taxes (see example below).  Now, there are lots of debating points here: 1) property taxes are not a huge part of overall operating costs; 2) this particular metal fab firm may not be ‘heavy’ industry as defined in the new report; 3) If Saint John had the flexibility of U.S. jurisdictions it could selectively reduce taxes for ‘strategic’ industries, etc. etc. etc.  So, I understand the debate.

Let’s just make sure that when governments make decisions – they have the best data to back up those decisions – and that data should be focused on our competitiveness as a jurisdiction.  And not just for business.  We’re going to need to attract 150,000 people to our shores over the next 15 years (Campbell forecast) – they will want to come and stay in communities that are ‘competitive’ – taxes, quality of life, quality of schools, green spaces, etc. 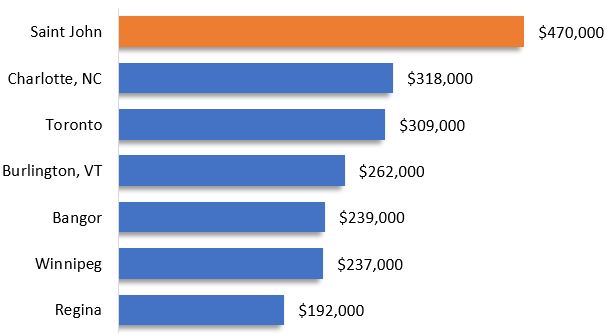 1 thought on “If we want to be globally competitive, we have to take that term seriously”