New Brunswick’s three larger urban centres (Fredericton, Moncton and Saint John) are trying to do something that is rare in recent Canadian history – dramatically increase immigration.  Historically, most immigrants have flowed into the largest urban centres – without substantial spikes.  For example, the Toronto area is still the top destination for immigrants but it has never seen a 3 or 4 times increase in a short period of time.

If you look at the average immigrant flow (from Statistics Canada’s components of population growth tables) into the Moncton CMA it is up by nearly 500 percent in just a decade (I used five year increments to smooth out the effect of Syrian immigrants in the most recent year).  Saint John’s immigrant flow is up by over 160 per cent.  This is unprecedented.  It is also fundamental if we are to see New Brunswick’s labour market growing again and if we would like to see a sustained return to economic growth. 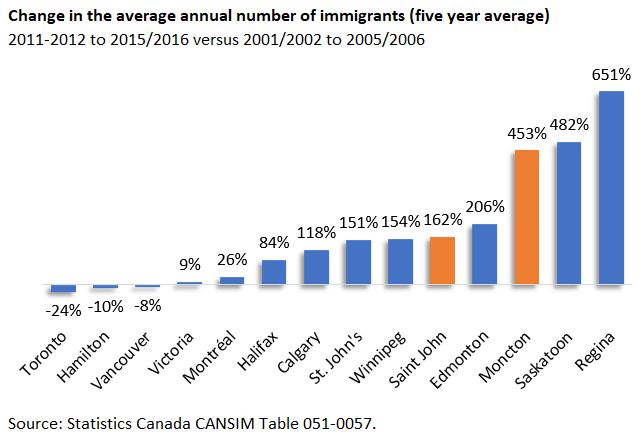 I believe this is the most important challenge of our time.  If New Brunswick is to grow it will need to become far more multicultural – in a condensed period of time – far more quickly than places like Toronto and Vancouver which had a more paced move towards their now highly multicultural societies.

We can’t do this with one hand tied behind our back.  Of course we will see outward migration of some of these immigrants.  That is natural – look at Winnipeg as an example.  Don’t criticize the types of immigrants coming here.  Just look at the data for Canada’s large urban centres – immigrants flowed into industries that needed them.  Don’t use the fact that some New Brunswickers use EI as an annual income supplement to hurt those industries that need workers to grow.  Instead of restricting the flow of federal dollars in support of immigrants – those funds should be dramatically expanded.

How can we ensure such an expedited integration of immigrants without a massive effort?  We need stronger ethnocultural community associations.  We need churches to step up as they do in Manitoba and be catalysts for retention.  We need our public institutions – hospitals, schools – to embrace the challenge of immigration.  Giddy  up, folks.

I have argued on these pages that we are living in inconsequential times.  There haven’t been many big battles to fight.  It’s been all about incrementalism.  Now we have one.  A big one.  A whopper.  It’s fundamental to our future.  If we want to be a growing, thriving and dynamic economy – we will need to become far more multicultural.  I challenge anyone to prove – with data – how New Brunswick will be able to sustainably fund its public services over the next 10-20 years without a significant rise in its younger population and workforce – without a massive increase in transfers from the federal government.

This is the big battle of our time.  We need all hands on deck – especially the federal government.