I had a conversation recently with someone who thought we could learn from China as with think about economic development in Atlantic Canada.  He was an admirer of all the state intervention, planning, the 20-year plans to be the world leader in shipbuilding, green energy, etc. etc. etc.   When I look at China I have a different view.

My perspective is captured nicely in an Economist article this week (behind a paywall) that discusses in detail the massive rise in entrepreneurship in China over the past decade.  There are more unicorns in China (startups worth $1B or more) than in the United States.   Chinese entrepreneurs are disrupting almost every sector of the economy: transportation, finance, health care – they have leapfrogged North America in the development of data-driven health care solutions.

While we could debate that all day I think most people would agree that entrepreneurship is key – both inside established firms and the new start-up variety.  And, I think there is a growing pile of data to suggest that New Brunswick in particular is not seeing that kind of ambitious, disruptive entrepreneurship.  Don’t get me wrong, we have some examples – but I am talking about on a scale that moves the needle.  And not just ‘tech’ startups – entrepreneurship and disruption should occur across a healthy and vibrant economy from construction to personal care shops. 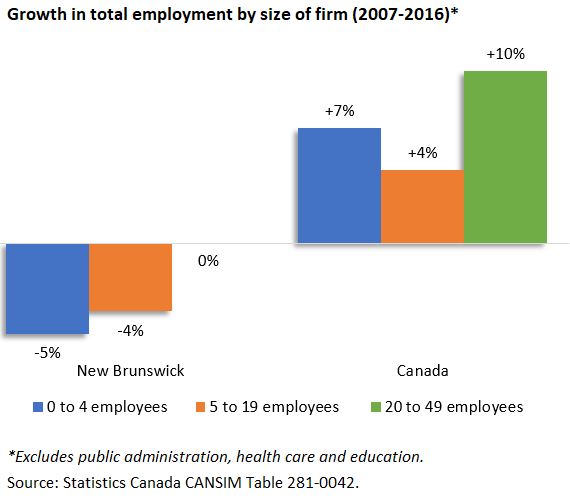 While this is not a perfect measure it is an important one.  If the province had hundreds of new firms starting up over the past decade driving innovation, new technology and business process improvement, we would be seeing growth in the number of small firms and their employment.

Now, I realize some of you will correlate the decline in small business employment to the stagnant economy and population.  That is true but I would argue it is getting increasingly hard to tease out causality here.

In the end I would like to see a new generation of entrepreneurs emerging in New Brunswick that want to shake up the status quo across all industries.

I’d like established firms to rediscover their entrepreneurial verve.  Many have gone for years floating on comfortable margins, building up a little wealth and they have lost that lovin’ feeling.  Do you remember what it was like to finish up a crisis planning meeting at 1:30 am?

The other thing about the Chinese is that they have global ambitions.  Just about all the firms discussed in the Economist article are already buying up firms across North America and Europe.   They might just be coming for you.

1 thought on “Cry havoc, and let slip the dogs of entrepreneurship!”