Jock Finlayson, from the Business Council of British Columbia, recently wrote a commentary where he suggested Canada’s export mix was not sufficiently diverse and too tied to the American market in the Trump era. He states that “Most other advanced economies – the U.S., Britain, Germany, France, the Netherlands, even Italy – exhibit greater product diversity in their export mix.”

There is some truth to his argument but there are also some nuances. First, you have to dance with the girl you took to the prom. Canada has large oil, gas, mineral deposits, large land area for agriculture, forestry and one of the largest coastlines in the world for fish harvesting. Because you are good in these areas isn’t a bad thing. Second, there are a few national industries not tied to these core natural advantages that are key exporters – auto manufacturing, aerospace manufacturing, film/media production, some pharma, and some financial services, less ICT but still important). The challenge here, and the little secret no one wants to talk about, is that it took (takes) huge subsidies and protections to see these industries emerge over many decades. As an aside, of course, New Brunswick generates virtually no economic value from any of these ‘national’ export industries.

So, what to do? If you rely too heavily on your core natural industries – you will get spanked by economists. If you – through huge subsidies, side-deals, protectionism – incubate a bunch of IP-based industries like auto/aero/film/finance – you are accused of picking winners/losers and distorting market forces. If you revert to the old tripe that a country should just open borders, cut taxes and red tape and sit back and wait for investment to roll in – where has that worked?

New Brunswick and national champion industries
Just to pick up on my previous point about NB and how it has fared in the national champion ‘business’ – take a look at the following table. It shows New Brunswick’s share of Canada’s international exports from the top 10 non-natural resources based sectors (i.e. agriculture, forest products, minerals, oil & gas, fish – I left plastic resins in there). Essentially, New Brunswick generates a trivial amount of international exports in these areas. We generate some exports in engineering services but relative to the national total still less than half our per capita amount. Same with tourism – the proxy here is accommodation services. And of course we generate virtually no export revenue in auto, aero, pharma. By the way, both Nova Scotia and PEI put up pretty good export numbers in aero and pharma. 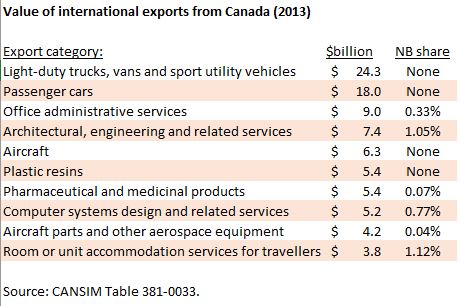