Donald Savoie made another pitch for Maritime Union or at least better Maritime cooperation in a recent Halifax Chronicle Herald commentary.  He focused his message at business leaders suggesting they should do a better job of promoting regional integration.

This has been an idea that is as old as Canada itself.  I’ve been to multiple events where it has been discussed over the past 20+ years and at least the concept of formal Maritime Union never gets beyond the highest level discussion.  I have said elsewhere – and continue to maintain – that if the region’s economy continues to stagnate sometime around 2026 Maritime Union will be more or less forced on the region by the federal government.

The good news is that trade between NB and NS has been going up in recent years (or at least the most recent years I have access to which goes up to 2013).  Nova Scotia is now our second biggest export market by value at $2.4 billion compared to $3.9 billion to Quebec.  If you look at what we are exporting there are a few interesting products and services.  The bulk of exports comes from refined old and forest products but office administrative services (AKA contact centres) export revenue was over $113 million in 2013 and gambling was worth more than $63 million.

While I have been pushing the idea that New Brunswick needs to be focused more on where it fits in the global economy – investment, people and idea flows – that doesn’t mean we should ignore the low hanging fruit in our backyard.  The Economist magazine runs stories its seems on a monthly basis of how trade flows continue to be stubbornly tied to geographic proximity (they are discussing it in the context of Brexit).  New Brunswick should work closely with its partners in NS and PEI – government-to-government and business-to-business. 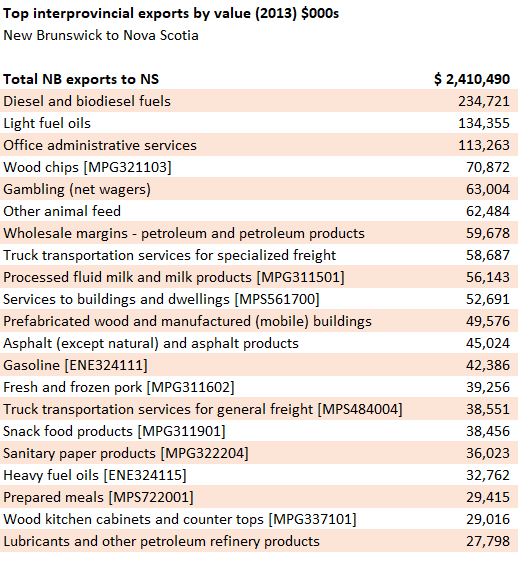