The journalist Jacques Poitras likes to do his little “Where is this place” on Twitter.  Because originality is challenging these days, I’ll borrow his game with a twist.  I’ll ask – when is this?  To be specific what was happening in May 2003 that would make this chart so significant? 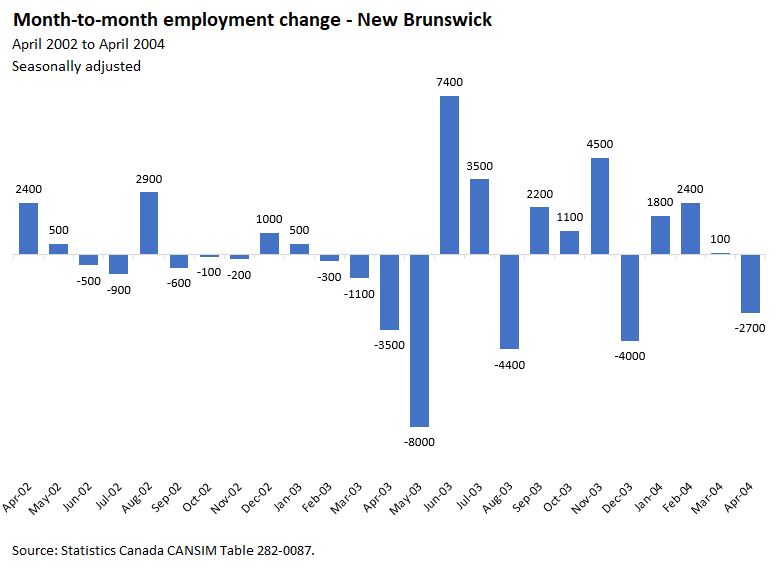 Did you guess it?  Without Googling?  When the May 2003 labour force survey data was published it was right in the middle of the 2003 New Brunswick election campaign.   Why I remember this so vividly was the strange response Premier Lord made at the time.  When he heard the employed labour force dropped by 8,000 in one month – his response was “I don’t believe it”.  Now considering Statistics Canada is one of the most respected national statistics agencies in the world, I would have thought he would have went with the usual boilerplate about typical monthly fluctuations, the longer term trend looks better, etc.  but he chose to go with “I don’t believe it”.  Anyway, he ended up taking a bit of a beating in 2003 and nearly losing what they had thought would be a sure thing election.  I’m not sure the LFS swayed a lot of votes but it certainly was bad timing.

Take another look at the chart above.  What happened the very next month? Almost a complete course correction.  Now take a look at the labour force trend in New Brunswick in recent months (remember the labour force is the sum of those working and looking for work).   In just the last couple of years I see at least three big month-to-month swings in the size of the labour market – down big one month and up big the next.  This is the nature of the LFS.  It is equally possible when the September LFS is published the NB labour market could have increased by 4,000 or 5,000 – or not.  The point is that month to month trends are not reliable. 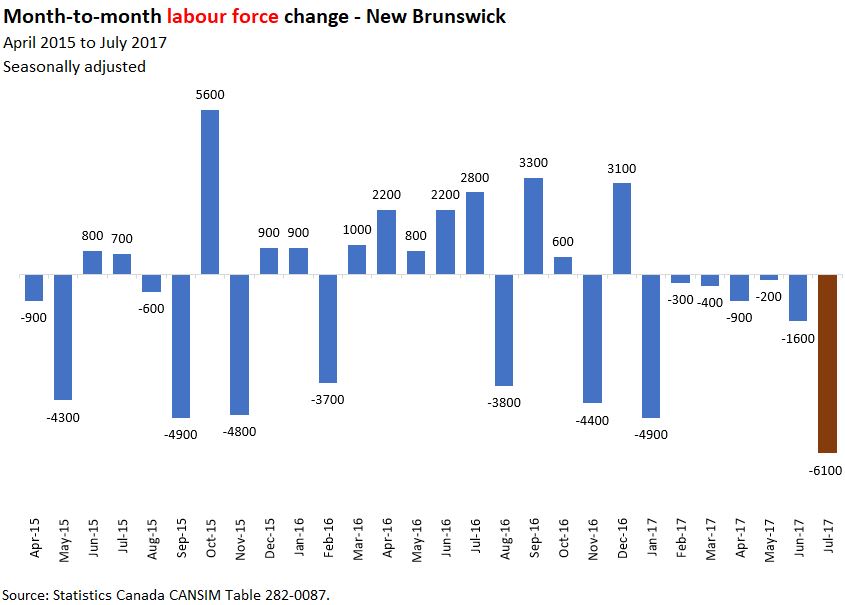 I have to admit it was kind of cute to see the government publish “lowest unemployment rate since 1976!” with a NB map graphic – and then the opposition published “biggest labour force decline since 1976!” minutes later.

Rather than snazzy infographics – both the government and the opposition should have used the data as a teaching moment.  New Brunswickers need to understand that the long term trend for the labour force is that it is in decline.  You have to go all the way back to January 2001 – the month before my youngest was born (now she is VP student council at Moncton High in Grade 11) to find the last time the labour market was smaller in July than it was last month. 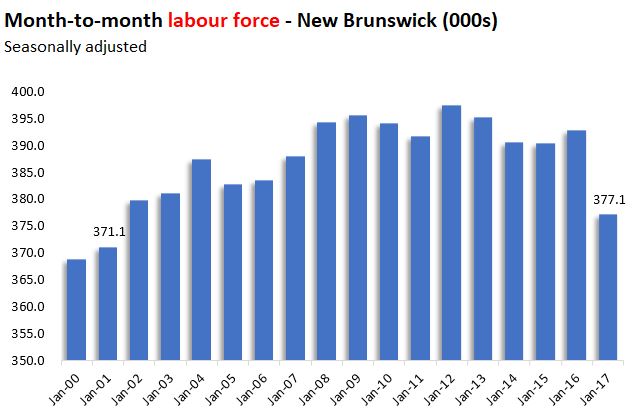 A shrinking labour market is a drag on economic growth.  Couple this with rising public service cost pressures (i.e. health care) and you have a long term challenge.  We fix the challenge by deliberately growing the workforce with people who want to work the jobs on offer.

This is the biggest issue that no one really wants to talk about.  I hear on a weekly basis someone saying that “little Jonny had to move to Alberta because there were no jobs here – why do we need immigrants?”  The truth is there are lots of jobs if little Jonny wants to move around within New Brunswick and is prepared to take the jobs on offer.  In January, Statistics Canada reported in its Job Vacancy survey there were 5,700 jobs available in that month alone.  There were 1,800 jobs in sales and service occupations, nearly 800 in manufacturing jobs and 650 in trades related jobs and 600 in business and finance jobs.   But the average wage on offer wasn’t particularly high for many of the jobs as shown in the following chart.  If you can’t do the math on these jobs I will do it for you.  On an annualized basis these jobs pay between around $23,000 and $34,000 per year.

But if we can’t fill these jobs, the economy will not grow and create the higher paying jobs that Jonny, who graduated with a liberal arts degree, wants and his mother thinks he deserves.

So we either a) find pockets of potential workers in New Brunswick and find a way to get them to take the jobs, or b) we allow the labour market to tighten even more and force up wage rates (by the way wages in New Brunswick on average have been growing much faster than the country as a whole for the past 3-4 years) or c) we find a new source of workers that want to work the jobs on offer.

Option A is not working too well and that is why the labour market hasn’t grown in 15 years (July to July).  There are a whole bunch of reasons why people don’t attach to the labour market – from the 38,000 who collect EI each year to students for whom a job would be nice but not worth moving for or taking a job beneath them.  In addition there is the issue of skills mismatch.  A recently retired logger probably isn’t going to work in a contact centre.

Option B is kind of what we are doing already and how’s that working out?  Annual real GDP growth since 2008 of well below 1 percent going back to 2008.  Companies that can shift work out of New Brunswick are doing it (truckers, manufacturing line workers, etc.) and many that can’t or won’t just aren’t expanding here.  Don’t get me wrong I think there is some potential to boost wage rates through productivity but at the point it triggers dis-investment – it is not worth it.

So that leaves Option C – the option used by Manitoba (fastest growing GDP since 2009) and essentially all provinces that are growing.  Go find the workers – from far and wide – that you need in your economy to foster growth.

This is the teachable moment.