I’m a big fan of the Atlantic Provinces working together to address challenges we have in common and pursue opportunities where there is alignment of interests.  The idea of the Atlantic Growth Strategy is a good one – therefore – but I do find some things puzzling.

For example, the exports development strategy.  The provinces and the federal government are going to spend an additional $20 million over five years on export market development with the goal of boosting the value of exports by 30% and double the number of exporters.

The first issue is one of definition.  What is an export?  Some people define it has international merchandise exports because we get monthly robust data on this type of exports.  Some include interprovincial exports which are a huge source of revenue but these exports are harder to track.  Most don’t think about services exports – these are also a huge source of export revenue – again just harder to track.  How about tourism?  Technically speaking tourism is an export sector as it brings money in from outside the province to access a service.

The same challenges apply when we talk about ‘exporters’.  Is an NB firm that does construction work in Nova Scotia an exporter?   For the feds – unlikely – but for NB export revenue is export revenue.

But based on the data and definitions we do have, I’ll make a few observations.

First, I don’t understand this notion of doubling the number of exporters.  This has been part of New Brunswick’s strategy for years and the numbers are going down (see the graph).  To double the number would take a roughly 15% growth rate – per year for the next five years.  The math isn’t good – $20 million to foster 2,200 more exporters – or less than $10,000 per exporter.  It will not happen, period. 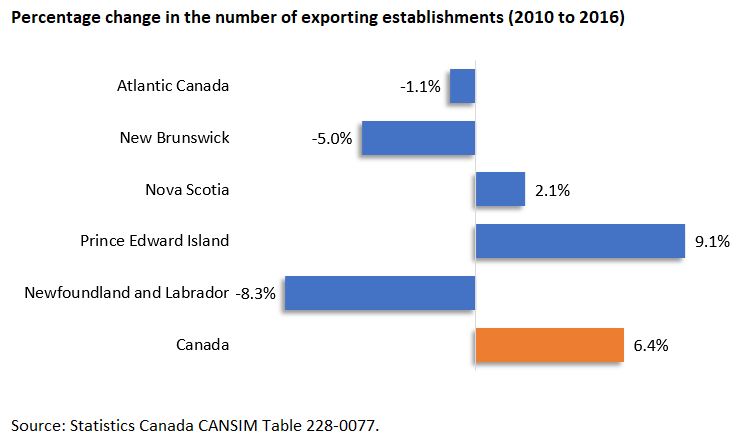 Plus it doesn’t matter.  One exporter that generates $1 billion in new export revenue is the same as 1000 that generate $1 million in new export revenue (ceteris paribus).  Of course this is facetious but not really.  There is something to be said for scale – a few large exporters are likely a lot better for an economy than hundreds of small exporters.

The main point here is that goals drive focus.  If your focus is on getting 2,200 firms to export more you will put huge time and energy to try and get as many small firms as possible to export more.  If your focus was on developing one our two export industries – you could concentrate economic activity.  For example, New Brunswick is going hard after cybersecurity.  Through startups and the attraction of national and international firms it might end up with 10-15 new exporters within five years – generating $10s of millions in export revenue.  But this will only happen with an intensive, focused effort of resources.  I’m not sure what the budget for the cybersecurity cluster is but if you include R&D spending, etc. it is in the millions of dollars per year.  One mining project – Sisson – will boost export revenue by several hundred million.  A 50% increase in business services export revenue (remember it is already a $1.4 billion dollar export industry) would boost exports by $700 million – via a handful of firms.  If NB were to attract a Google development centre that would likely drive $10s of millions worth of export revenue.

Finally, I’ve said this a hundred times and likely it will never happen but I think we need to do a better job of alignment – investment, trade, talent, ideas.  If we think there is potential to develop a certain region in India across multiple fronts we should put a team in place – in market – with proper resources and political support – and develop that market in an intensive way.   Ontario has economic development offices in something like 16 countries, BC, Alberta, Quebec (has 100+ staff in France alone).  We in Atlantic Canada have something in the range of 1,500 economic developers (fed, province and local) and they are all (or almost all) located in the region and focused on squeezing a little more juice out of the regional lemon.

If we really want to boost immigration, exports, investment and ideas – we will have to get beyond superficial efforts.  Working collectively as Atlantic Canada should provide some scale to do this.

1 thought on “The puzzling focus on expanding the number of Atl. Canada exporters”