I am increasingly of the view that New Brunswick and its communities actually spend too much time on introspection. A little introspection – time on the couch – is good. Too much leads to paralysis.

But on a momentous birthday, a little introspection is good. What if New Brunswick’s population had increased just at the national average since 1971? As shown in the graph, we would have 1.06 million population today and the province would look much different than it does today. 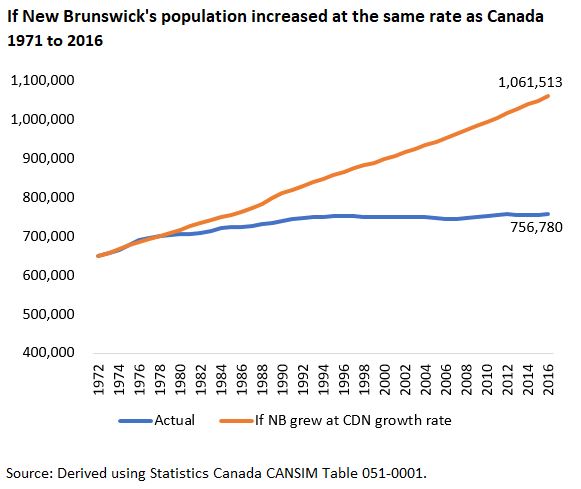 The so-called EI dependency problem would have gone way down. People complain about the large number of people who collect EI every year. Well, the number is actually about 35,000 – those who go on EI at some point during the year – on an ongoing basis. Assuming that number didn’t grow by 2016 it would only represent about 6.4% of the labour market in 2016. In other words we would grow our way out of the EI problem. Don’t forget there are nearly 100,000 people that collect EI every year in Ontario (and 156,000 in Quebec). Why no one is blowing their top about all the lazy Ontario-ians is that the 100,000 EI users is out of a labour force of 7.5 million. If we had witnessed just our share of Canada’s population growth since 1971 we would have significantly reduced the EI dependency issue through growth alone.

It is likely that government spending would have been more sustainable. This is not a given as governments tend to use the dividends of growth to spend more. Alberta, Saskatchewan and Newfoundland and Labrador have the highest per capita provincial government spending as a result of their boom years.  Back in 1990s SK and NL spent about the same as NB on a per capita basis now they are 16% and 27% higher respectively.

Our demographic situation would be much stronger.  Canada’s median age is 10% younger than NB – in demographic terms that is a big difference.

Finally, this level of growth would have assumed a strong and sustained level of immigration over the 45 year period.   A rough estimate would suggest about 23% of our population would be landed immigrants rather than the 5-6% it is today.   I think this would have enriched our province over the period.

Why does it matter?  The Self-Sufficiency Agenda back in 2007 called for population growth of 100,000 by 2026.  We are 2017 and the population has barely budged.   Twenty years ago the est. population was roughly the same as it is today.  Canada, just in case you are wondering, added 6.4 million to its population over the same period.

Looking forward to Canada 200 there are basically two trajectories for New Brunswick.  Either this province will have a much larger population or it will have merged with NS and PEI and will be a rump of its former self. 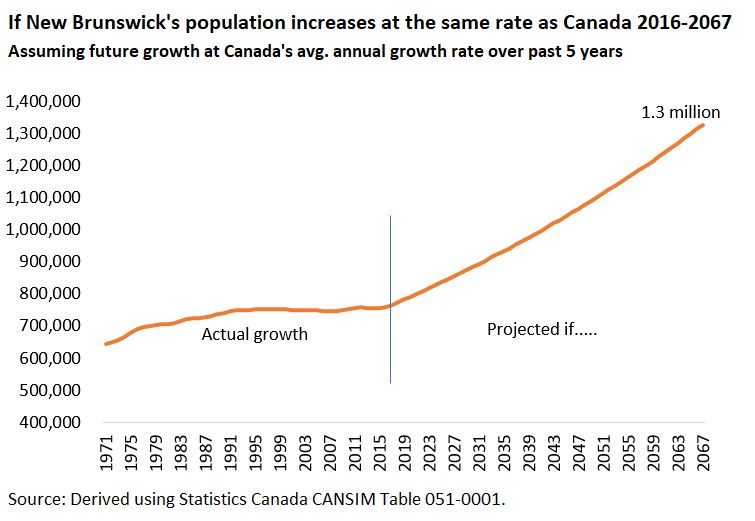