For those of you following this blog you will recall my concern over the state of the ICT industry recently.  Its GDP contribution dipped from $921 million (real GDP) in 2011 to $852 million in 2015.  In fact, in real terms, ICT GDP in New Brunswick in 2015 was similar to what it was way back in 2007 ($846.4 million).   To put that into perspective every other province in Canada saw faster growth in ICT GDP over that period.  Quebec’s rose by 23%, Saskatchewan by 24%.

But the NB ICT industry GDP contribution increased by 3.8% in 2016 and, in fact, accounted for 13%  of the solid overall growth rate in provincial GDP between 2015 and 2016.  Employment also seems to be rebounding (note that in the chart the percentages equal more than 100% because a number of sectors saw a decrease in their GDP contribution such as potash mining which alone reduced provincial GDP by 0.3% in 2016). 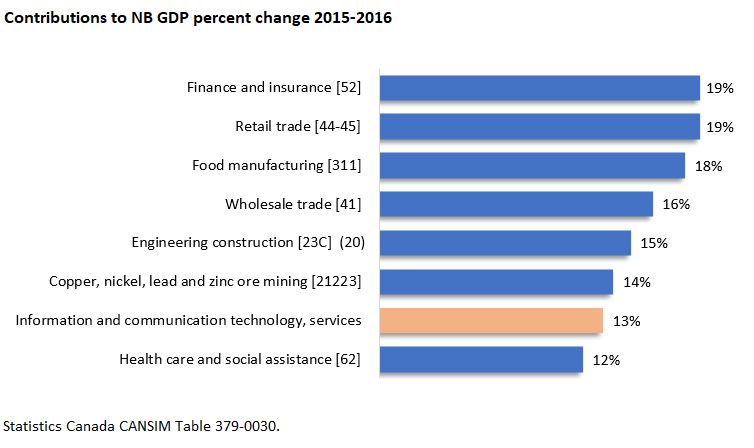 Encouragingly there seems to be some firms that are scaling too.  Between June 2012 and December 2016 the number of IT firms with between 50-99 employees jumped by seven, the number with between 200 and 499 increased by four and one IT firm jumped into the 500+ category.  Not that I exclude the ‘C’ in ICT here as there is one telecommunications firm with 500+ employees (Bell Aliant). 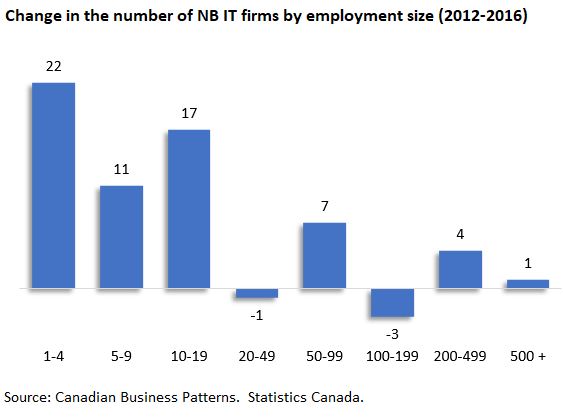 Despite this 1-2 years of encouraging trends, NB’s ICT industry continues to be among the smallest in Canada – tied with PEI and slightly larger than Alberta and Newfoundland – although that is really not a great comparison because Alberta’s overall GDP per capita is substantially larger than New Brunswick.  We would like to see an ICT industry that grew in a sustained way for a sustained period of time driving exports growth, attracting capital investment, fostering innovation and providing good employment for young NBers.